"NAOMI AND MICHELLE'S EXCELLENT ADVENTURE" IS 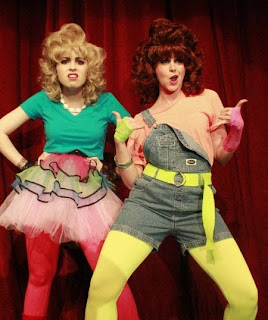 Looking for more action are Amanda Valenzuela (L) as Michelle and Jennifer Ackerley Lawrence is Naomi at the Great American Playhouse.

Have you ever wondered what Franklin D. Roosevelt would look like rocking out in his wheel chair, a blanket on his lap, singing “It’s the eye of the tiger, it’s the thrill of the fight, risin’ up to the challenge of our rival!”

Well, wonder no more. You can see for yourself in the hale and hearty new show on the northwest side at the Great America Playhouse, “Naomi and Michelle’s Excellent Adventure.”

Taking audiences on a time traveling trip through history, writer/director Sean MacArthur stops by the White House in 1944 where the President (Nick Seivert) is riding herd on the war’s two most polarizing generals – Patton (Michael Claridge) and MacArthur (Sean MacArthur).

Staying within the melodrama spirit of music and comedy, MacArthur (the playwright) pays tribute to the war’s victors but also imagines a hilarious hissy fit between Patton and MacArthur (the general) that can only be described as an egomaniacal four-star cat fight.

As one character remarks onstage, “War is God’s way of teaching American’s geography.”

You gotta’ love it.  Going for a mix of mediums somewhere between “Saturday Night Live” and Jon Stewart’s “Daily Show,” GAP is staging some thoughtfully funny theater for the month of Independence Day.

In unobtrusive ways we are reminded how many of the problems our Forefathers faced in fighting for independence have come back around to us again.

Ben Franklin, Thomas Jefferson and John Adams are in Philadelphia in 1776 singing about “Takin’ It To The Streets” while there are references to the Tea Party and Obamacare, reminding us without saying a word that our nation was born in revolution.

But we are still talking entertainment here, giving the heroes a big cheer and giving the villains a big boo, laughing at the dopey antics and exaggerated clueless observations of Naomi (Jennifer Ackerley Lawrence) and Michelle (Amanda Valenzuela).

Most of the roles are double cast, but at the performance I attended, Valenzuela was totally awesome, dude. Still in high school at Catalina Foothills, her dedication to this clownish role and the concentrated energy she poured into it were exceptional.

Lawrence was a good match, balancing Valenzuela move for move. But Lawrence is graduated from New York’s American Musical and Dramatic Academy. These two could take their act on the road any time.

In any melodrama, you can’t have great heroes without great villains. Jacinda Rose Swinehart comes out to do all the heavy lifting in the show’s full run as the angry cheerleader Arianna.

Ridiculous high school cheers are always good for a laugh, but this time Arianna turns the short-burst cheer into a long-form chant that builds up steam like a locomotive – ending with the capper “It’s our duty to kick your booty!”

As for the plot, well you know that one. It’s drawn from the 1989 film starring Keanu Reeves and Alex Winter, “Bill and Ted’s Excellent Adventure.”  There is a pink telephone booth that becomes the time machine taking Naomi and Michelle to various pivotal moments in history.

The two girls are best pals and most excellent volleyball players who must pass their history class if they are to be academically eligible for the big volleyball game.

Posted by TucsonStage.com at 6:30 PM