BOO THE VILLAINS AT "WAIT UNTIL DARK" 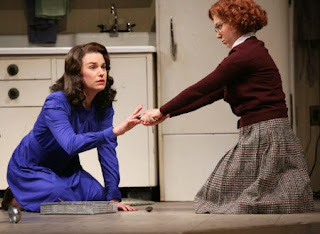 Arizona Theatre Company continues its season-opening string of easily accessible productions with a quaintly atmospheric adaptation of Audrey Hepburn's 1967 cinema classic “Wait Until Dark.” That movie was based on the 1966 Broadway play by Frederick Knott (who also wrote “Dial M for Murder”).

Now ATC's favorite playwright/adapter Jeffrey Hatcher (“Dr.Jekyll and Mr. Hyde,” “Tuesdays with Morrie”) has fluffed up “Wait Until Dark” by moving it back in time to a Greenwich Village basement apartment in 1944, and added some film noir trappings which actually do make the story's “who dun it” quest feel more authentic.

But really, it isn't “who dun it” so much as “where is it,” for a scheming trio of miscreants are trying to find and repossess a baby doll stuffed with diamonds that was hidden among Susan's husband's handbags at the airport.

Now the gangsters want their doll back. They got the address of Susan's apartment from the baggage tag and will do anything to retrieve their swag.

Everyone who has seen the movie (which has been a favorite of Hepburn fans worldwide for decades) can easily follow along through a wordy Act One that mostly just introduces all the characters and gives the audience some indication of the dastardly lengths to which these evil villains will go.

We also learn that Susan (Brooke Parks) was blinded in a relatively recent auto accident and is remarkably adept at picking up clues which sighted people would easily overlook. Her cleverness in blinding others by the dark puts the thrill into Act Two.

If you remember black-and-white TV, and life before the digital wizardry that now rules our days, stories like this were popular fare in live television productions from all three national networks.

The previous ATC offering, “Vanya and Masha and Sonya and Spike,” was a comedy with scenes reminiscent of the skit routines performed on the small screen by Carol Burnett and her wacky colleagues.

So what else can ATC possibly be planning? Is Alfred Hitchcock waiting in the wings? Or perhaps Ellery Queen with tap dancing? The next play on the company's schedule is billed as a new musical comedy titled “Murder for Two.”

We report, you decide.

Meanwhile, we can appreciate Parks' sympathetic performance as the resourceful Susan. For the whole thriller aspect to work, her blindness must be believable. Also, her spirit must be strong.

Yet, at the same time we must feel how she is fighting back the fear for her life while stringing together as quickly as possible enough clues to separate the good guys from the bad guys.

Peter Rini plays Mike, now turned into an Army lieutenant on leave from service in Europe. Richard Crenna played this role opposite Hepburn.

In the movie, Alan Arkin is Roat, the blackest of the bad guys, a raving sociopath. Ted Koch takes this part on the ATC stage. He doesn't feel that dangerous, but the audience on opening night was buying into the whole melodrama package.

When Koch and Craig Bockhorn, who plays Roat's accomplice Carlino, came out together for their curtain calls the audience booed them roundly, to compliment their villainy – a rare response at ATC but routine every night for audiences at Gaslight Theatre.

“Wait Until Dark” continues through Nov. 8, with performances at various times Tuesdays through Sundays at the Temple of Music and Art, 330 S. Scott Ave. Tickets are $37-$67. For details and reservations, arizonatheatre.org, 622-2823

Posted by TucsonStage.com at 4:53 PM