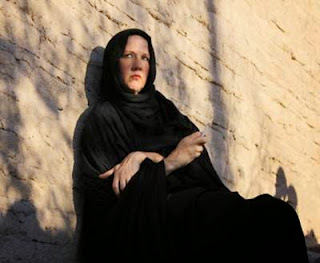 The horror and the defiance of extreme wartime combat is brilliantly captured by Lori Hunt at Live Theatre Workshop in a heart-breaking portrait laced with bitter humor of Iraqi women smothered in their own country by the ambitions of men with power.

Iraqi-American playwright Heather Raffo wrote “9 Parts of Desire” after spending several years living among women in Iraq between the two Gulf Wars to gather their stories.

That humor comes from the determination of these women to maintain some sense of dignity despite their helplessness at the hands of others. One of the saddest stories is told by the one who suffered the least physical pain.

She was an accomplishment artist who chose to survive by painting nude female figures – a subject of extreme shame in the eyes of this proper society. But the paintings brought happiness to influential men in her circle of society

The same society that thinks it appropriate for parents to slay their own daughters who dare to become pregnant outside of marriage.

Some of the stories contain such brutal details, it took remarkable courage as an actor for Hunt just to take on these roles, subjecting her own psyche to the agony of living the experiences in order to tell the stories.

Additionally, Hunt gives each of the nine women a different set of mannerisms. A long black scarf becomes a shawl or other items of clothing; her body language changes to suite a child, a defiant adolescent, a cynical sophisticate and others; her accent shifts from Middle Eastern to British to American and back again.

As a performance, Hunt onstage alone deserves every possible accolade, as well as a standing ovation after every performance. Her telling of these stories directly to the audience lifts acting to an entirely new and far more personal level.

It's guaranteed that some of the stories will stay in your head for a long time. The U.S. Government's refusal to allow any significant video coverage has made the current 13-year conflict a kid of ghost war. Consequently we don't really know anything about the people living in this interminable killing field without borders.

“9 Parts of Desire” will change that forever.

For centuries Vietnam was a lovely tropical country, until aggressive communists filled the leadership vacuum created by the departing French.

Once again the essential beauty of a mystical place -- this time dating back, literally, to the beginning of civilization – is shattered by unimaginable cruelty as detailed by these nine women.

An ancient Muslim saying, we are told, holds that God created sexual desire in 10 parts and then gave nine parts to women.

What that means, exactly, can't be said for there are probably as many interpretations as there are Muslims.

Those nine parts aren't labeled in Raffo's play, but she finds many tragic expressions of frustrated, damaged and destroyed lives in developing each of these nine monologues.

"9 Parts of Desire” continues through Nov. 15 with performances at 7:30 p.m. Fridays and Saturdays, 3 0.m. Sundays, at Live Theatre Workshop, 5317 E Speedway Blvd. Tickets are $20 general admission, with discounts. All tickets the final Thursday before closing, $14. For details and reservations,  520-327-4242, or livetheatreworkshop.org

Posted by TucsonStage.com at 6:53 AM