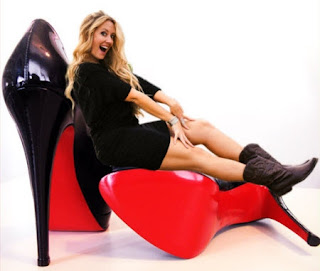 Hey ladies, do you want to upgrade your man's interest in theater? Put a little something extra into your own social life with that special person?

Well, Live Theatre Workshop has a play for you – Theresa Rebeck's comedy “Bad Dates,” with a full-out burst of good-hearted energy by Shanna Brock as single mom Haley.

Men go on bad dates, too, so the universality of this show is undeniable. Plus Brock's performance is irresistible.

Some women will say the real star at LTW is Haley's shoe collection. Remarkably diverse in style and color scheme, different pairs of shoes figure prominently in every date she prepares for, adding amazing shoes to her own big smile, open heart and generous Southern accent.

Haley is, after all, the sort of Texas-practical girl who will spot a wild pair of shoes on sale at an outrageous price, and buy them convinced that sooner or later the event will come along for which these particular shoes will be absolutely perfect.

At one time in Texas she had 600 pairs, a husband and a child. But now she's single again, living in New York City with her seven-year-old daughter and a bedroom jammed to the gills with shoes, working as a waitress in a restaurant owned by a Romanian mob who uses the place to launder money.

As Haley roams about the stage, telling us what her life was like before moving to New York, and then adding details about the restaurant and each of her unfortunate meet-ups, she's also taking off clothes (discretely) and putting on other ones – no mean feat considering some of the outfits.

With each move she fills out a little more of Haley's personality. Brock's own bubbly nature is dedicated to making Haley as sympathetic as she can be. There are no other actors in the cast, but listening to Haley's tales it is easy to visualize them.

The bad dates are an odd collection of guys preoccupied with themselves – one can't stop talking about his medical problems, another about his position as a law professor at Columbia University. Like that.

What we love about Haley is her spunk and her optimism. Brock makes sure Haley has plenty of that.

Posted by TucsonStage.com at 8:33 PM