SIN GETS UGLY IN "DORIAN GRAY" 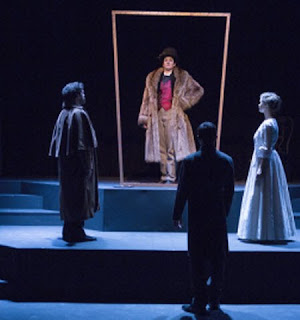 Evil is supposed to taint us, mark us with worry and dissipation, directly in relation to the amount of evil in each of our lives. At least...that is the traditional view of traditional moralists who like to point fingers at the ugliness of sin.

But as today's culture clash has continued to remind us for the past few decades, yesterday's evil could become today's triumph of justice over conservative moral values. Of course, new evils keep popping up to replace the ones that have fallen out of fashion.

Now for a few weeks the ever-daring Rogue Theatre is taking its audiences back to beautifully costumed Victorian England, when homosexuality was the love that dare not speak it's name and cocaine was sold over-the-counter at the corner apothecary.

Christopher Johnson is leading this tour through the rigid righteousness which the court of Queen Victoria demanded. He is both director and playwright adapting Oscar Wilde's “The Picture of Dorian Gray” to the Rogue's bare stage depicting shadowy passions and elegant estates in the audience's imagination.

Wilde wrote “Dorian Gray” as a philosophical novel extolling the virtues of beauty as the highest calling of any artist.

Since joyful pleasure was an emotion severely frowned on by proper folk, London was incensed. Wilde was censored and took great delight in flaunting his progressive taste for every beautiful experience the human body could provide.

That's the set-up. In the Rogue's production, Dani Dryer has the title role, depicting Dorian as an idealistic youth of impeccable manhood, innocently following his own philosophy of always wanting more kinds of beauty and deeper layers of achievement in the pursuit of unleashed feelings.

Evan Werner plays the artist Basil Hallward who paints the picture of Dorian. From the beginning Basil fears his love for Dorian will be so obvious in the painting that Basil will get in trouble with the law.

Dorian is taken by the picture, as well. He wishes he would never grow old, but instead stay forever in that glowing state of sexual attraction. “Let the picture grow old,” Dorian thinks, “instead of me.”

Even more eager to lead Dorian astray is Lord Henry Wotton (Joseph McGrath), who not only thrives on debauchery but has the money to do so.

Lord Henry and Dorian make quite a splash together on London's seamy side. Sure enough, Dorian remains pure on the surface, while his picture becomes twisted and ugly – a constant reminder of the deception that has become Dorian's life.

Also in the cast are Dylan Page is the angelic beauty Sibyl Vane, sure to be trammeled by Dorian's wastrel ways. Matt Bowdren plays James Vane, a kind of narrator representing several others in this steamy milieu.

For better or worse, Johnson has chosen to let all his characters speak in long essay-like passages rather than conversations that would reveal their thoughts and personalities. This takes a little getting used to.

But the ideals, the philosophical ethics, the conflicts between propriety and possibility, are all there. Along with the hypocrisies and hidden agendas Victorian society demanded.

“The Portrait of Dorian Gray” continues through July 26 with performances at 7:30 p.m. Thursdays-Saturdays, 2 p.m. Sundays, at the Rogue Theatre, 300 E. University Blvd.

Discussion with the director and cast follows every performance.

Posted by TucsonStage.com at 8:29 AM