THE WIZARDLY TRIUMPH OF "HENRY PORTER" 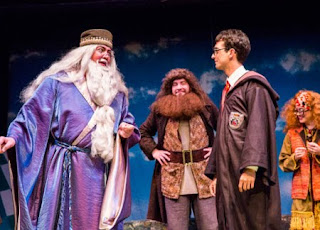 Big hair was very important to the mythic forces in play at the Gaslight Theatre.

After having its way with “Star Wars,” the Gaslight Theatre gang now turns its attention across the pond to England's own iconic fantasy adventurer, Harry Potter.

But just to ensure there is no confusion, at the Gaslight this spunky lad is known as Henry Porter.

As in “Henry Porter and the Sorcerer's Secret” playing through Nov. 8 (sometimes several times daily). Those steeped in the lore of Pottermania (you know who you are) will appreciate the attention to detail in Peter Van Slyke's script and stage direction.

An extra-large cast with several players taking more than one role makes it possible for this production to cover lots of ground. Act One provides all the back story on Henry's remarkable origins off-planet and his prophesied destiny, his need to grow up safe from evil forces by hiding out with a human family (not much different from being raised by wolves, it seems) and finally becoming 18, when he receives a written invitation – delivered by a raven – to attend wizard school at the Frogwaits Magical Academy.

Act Two finds Henry new on campus, donning the school's Selecting Hat that assigns first-year students to one of the traditional Houses, meeting his blond-haired student nemesis Gregor Belfry, learning and then winning at the flying broomstick game of Gringwich and feeling a special connection to one of the girl-type wizards, McKenzie Skinner.

For those keeping score at home, Ron Weasley doesn't have a counterpart in the Henry Porter version. Ron is represented briefly as a cardboard cut-out, but you must look quickly to catch him.

And since this is a Gaslight tribute, there must be a Happy Gaslight Ending. All those elaborate machinations of the evil forces led by Zlandagor are smooshed up to create one big, satisfying finale.

Most of the songs come from the 1960s and 1970s, another magical time in many quarters, mixed with some enthusiastic blues numbers. The showstopper is buxom Aunt Prunella's very bouncy “I'm A Woman” played alternatively by Mike Yarema and Jake Coffin.

The aftershow olio only brings the audience back to Earth just a little bit, turning to the Muppet Show for inspiration. Kermit the Frog has an ongoing role, though Miss Piggy's part is much smaller. Elton John is one of the special guests and, as for the jokes: “If Yoko Ono married Sonny Bono, her name would be Yoko Ono Bono.”

"Henry Porter and the Sorcerer's Secret” continues through Nov. 8, with performances at various times Tuesdays through Sundays at the Gaslight Theatre, 7010 E. Broadway. Reservations are a must. Tickets are $18.50 adults; $16.50 seniors, students, military; $8.50 children 12 and under. For details and reservations, 886-9428, or visit www.thegaslighttheatre.com

Posted by TucsonStage.com at 8:52 AM