THIS "LAUGHTER" IS A HIT 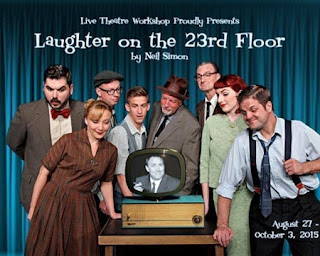 It's here! Tucson's first theater hit of a brand new season! Hie thee to the east side where “Laughter on the 23rd Floor” by Neil Simon is playing through Oct. 3 at Live Theatre Workshop, 5317 E. Speedway Blvd.

The dialogue is quick, snappy, zippy and funny as this finely tuned cast of nine directed by Lesley Abrams bangs out one punch line after another while adding tons of nostalgia from the Golden Age of Television.

There was a dark side to this Golden Age as well, when there were just three TV networks and no remote channel changers. When three guys – the network CEOs – ran everything. And a top Nielsen rating was gold...literally.

Return with us now to those thrilling days of yesteryear in Simon's play, written in 1993 and set in 1953, bristling with more retro-rocket humor than a vaudeville convention in the Catskills.

The more you remember about those shimmery little screens in the great big boxes, broadcasting their black-and-white images with fuzzy edges, the more you will enjoy this leap across six decades of comedy chemistry.

The playwright is doing his own reflecting on the time when he was a bright young guy trying to break into the business writing jokes for Sid Caesar, sitting around a cluttered kitchen table with seven other writers in a big, empty, grungy room.

Some other bright young guys around that table at one time or another were Woody Allen, Mel Brooks, Carl Reiner and Larry Gelbart. None of them are in this play, but all their crazy jokes and wacky spirit certainly are.

Simon sets up a small role representing himself as a  young jokester, scarcely more than an intern, named Lucas (Noam Shahar). He explains and narrates a few things here and there. The eight writers are personally hired by TV star Max Prince who has a 90-minute show every week on one of those networks.

Stealing every scene he has is Steve Wood as Val the bushy eyebrowed Russian immigrant funnyman, representing all the witty and artistic genius Europeans who fled fascist nations in the 1930s and 1940s.

Cast as Max, the larger-than-life comedian and man in charge, generally acknowledged to be a humor genius, is Chris Moseley sucking on a big cigar and being completely convincing.

Most animated (of course) is Stephen Frankenfield as Milt, who wears crazy costumes to make himself feel funny.

Each of the others also creates an eclectic personality to go along with their stage lines: Brian Wees, Dean Steeves, Matthew C. Copley and, the only female in the bunch, Bree Boyd as Carol.

Perhaps Boyd represents Imogene Coca, but she definitely holds her own with this boisterous boys' club. In her big scene she insists on being recognized as a writer, not a female writer, taking pride in her familiarity with the worst and strongest swear words.

Tickets on Thursdays are $14; all other times, $20 (discounts for students, military and seniors 62+). For details and reservations, 520-327-4242, or visit www.livetheatreworkshop.org

Posted by TucsonStage.com at 4:08 AM