A SPIRITED PRODUCTION OF "AL-WAYS...PATSY CLINE" 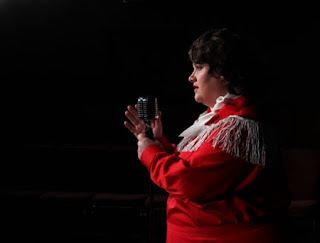 It's not so much the music of Patsy Cline as it is the spirit of “Always...Patsy Cline” that makes Live Theatre Workshop's production come alive. This tribute showcase penned by Houston playwright Ted Swindley and directed by Annette Hillman becomes a hearty southern hug of female friendship for all time.

The program lists 27 songs spanning a career cut tragically short in 1963 when Cline died at age 30 in an airplane crash. She had a confident voice that projected deep layers of unquestioned sincerity.

Becoming popular at the time when a new wave of feminism was taking over the news cycle, her songs always stood for more than just songs.

Cast in the role is Amanda Gremel, giving each piece her own taste of personality. With her on stage is a five-piece string band led by Harriet Siskin, pianist and music director.

Grenel sings with a disarming directness well-suited to the intimate atmosphere of LTW's performance space.

If you love Patsy Cline, come for the music. But stay for the delightfully energized and hyper-animated performance of Samantha Cormier as the world's most vigorously fortified super-fan, Louise. She is the one who adds the extra hugs and kisses of delight.

As a theatrical feat, Cormier's shenanigans are a wonder of eagerness and immediacy. While it feels like everything is spontaneous and improvised, we also know she is acting. How does she do it?

Historically, Cline had been a Nashville regular for years, then became a national cross-over sensation after her 1961 appearance on “Arthur Godfrey's Talent Scouts” singing “Walkin' After Midnight.”

Louise was just another cigarette smoking Houston housewife bogged down in marital unhappiness when she first heard Cline's voice in the 1950s. The play begins with that moment when Louise starts talking about how she met Patsy in person and was instantly transformed, dedicating herself to making sure everyone in the whole world knew about Patsy Cline.

So for two hours (plus intermission) Cline sings the songs and Louise tells the bouncy story that became her life's calling. Already hooked by Cline's songs on the radio, Louise was ecstatic in 1962 to learn the singer would soon be playing a Houston concert at the Esquire Ballroom.

Of course Louise got to the venue two hours early with her husband and her boss, long before anyone else arrived. So when Cline popped in to the Esquire by herself, just to look the place over, Louise was the only other female there. They met and the friendship that followed became a life-changing bond of loyalty.

From there on out we follow Cline's career through the eyes of Louise as they shared experiences through a long string of letters which Cline signed “Always, Patsy Cline.”

Among the 27 titles on the program are: “Crazy,” “Sweet Dreams,” “Your Cheatin' Heart,” “Anytime,” “I Fall To Pieces,” “Lovesick Blues,” “She's Got You,” “Seven Lonely Days,” “Blue Moon of Kentucky,” “Faded Love,” and from the gospel world “Just A Closer Walk With Thee” and “How Great Thou Art.”

Tickets for Thursdays are $15, all others $20 with discounts available. For details and reservations 327-4242, or visit livetheatreworkshop.org

Posted by TucsonStage.com at 6:42 AM