The University of Arizona School of Theatre, Film & Television 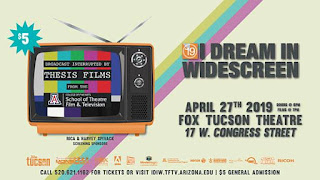 The University of Arizona School of Theatre, Film & Television presents the 2019 slate of Thesis Films. See these diverse shorts first before they hit the international festival circuit!

Tickets available in person, by phone and online through CFA box office until April 26, 2019 at 4pm.  After that date, tickets can be purchased at the Fox Tucson Theatre. Fox Tucson Theatre box offices opens at 5pm for at the door sales on the night of show.

It is recommended that tickets be purchased and picked up in advance to avoid long lines at will call on the night of the event!

Director George Clooney tells the real-life story of famed television journalist Edward R. Murrow and his conflict with Senator Joseph McCarthy, who in the 1950s stoked public paranoia about the Communist infiltration of America. Considering McCarthy dangerously irresponsible, Murrow plans to challenge him on air, even if it costs him his career. With a cast including Oscar-nominated David Strathairn, Robert Downey, Jr., and Clooney himself, Good Night and Good Luck is both a fascinating character study and a political drama that has never been more timely.

What do a demonic monkey, a son and his mother's restless ghost, one very tough audience, a talking cat, unhappy parents and their resourceful son, a truly transformative self-help program, one soldier's fateful decision, the return of the Rio Rillito Ranger, young lovers, hard times in a post-apocalyptic future, and a Chupacabra all have in common?

They are all part of Magic Hour, a free screening of short fiction films made by students in the University of Arizona's School of Theatre, Film and Television!

Posted by TucsonStage.com at 10:42 AM