THE SHOCK OF TRUTH FILLS "THINGS I KNOW TO BE TRUE" 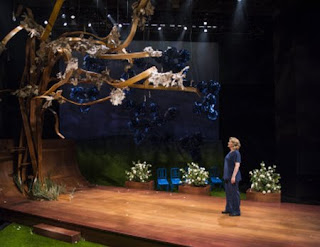 The mystical tree makes its promises to Fran (Jordan Baker) in this Arizona Theatre Company production.

"Things I Know To Be True” is a heartbreaking cry for help from the American family as we used to know it. Andrew Bovell the playwright is Australian, but his portrayal of fractured family values in this anguished production by the Arizona Theatre Company feels as American as a manicured suburb full of burned-out parents who tried to have it all.

Now facing retirement, their charred nerves are brittle with angst about never connecting with their children, who have hardened into young adults themselves, pushed ready-or-not toward a society that lacks for any rules or standards.

Our remembered thoughts of television families like Ozzy and Harriett seem as distant as life on another planet.

For the ATC version, today's family of six is transplanted from Australia to an unidentified location that feels vaguely Midwestern, with all the comforts of upper middle-class life. Dominating the essentially bare stage is an enormous, imagination-stretching dream tree full of impossibly-curving branches, towering above a row of vigorously blooming rose bushes,

Before the play begins, this tree encourages us to think of fairy tales and nymphs. Assuring us that whatever happens below, all the twisted personalities acting out their hand-wringing problems are just a fantasy.

Then the actors themselves appear out of the shadows, each more hapless, conflicted and confused than the last...and more angry, too. Suddenly “Things I Know To Be True” is feeling way too much like reality. That person is just like my sister, or my cousin. That fanciful tree is mocking us.

Mark Clements as director gives every scene the shock of another slap across the face. Conflict is what holds this family together. Every one of them has reasons to run away. But first, each wants to have a hearty helping of revenge.

If this family had a coat of arms it would include a flaming can of gasoline and a stack of hand grenades.

In an exceptional cast, Jordan Baker is a bit more exceptional as Fran, the hard-driving mom convinced that if she lets any family member get a way with the slightest little thing, the whole family will fall apart.

Softer-spoken Bill Geissslinger as Bob, the dad who wants to understand everybody, travels the longest arc and ultimately leaves us with the most poignant impression.

Pip (Kelley Faulkner) is the oldest daughter, always feeling played and also feeling suffocated in her own loveless marriage, which she talks about and we never see.

Aubyn Heglie plays the younger daughter Rosie, recently graduated from high school. She is this family's one ray of hope for a future, but not before her romantic heart gets badly battered before the play even begins, during her summer trip through Europe.

Feeling the most contemporary is Mark (Kevin Kantor), convinced he has been born a female in a male's body. In this family, his decision to get “the operation” is not well received.

Not without his problems is brother Ben (Zach Fifer), a straight businessman with prospects, who overplays his financial hand and tries to take some illegal shortcuts.

What make “Things I Know To Be True” an exceptional must-see experience is Bovell's biting dialogue and Clements' hard-nosed direction creating sympathy for all six severely stressed-out people caught up in ordinary meat-grinder conflicts that remind us this is everyday 21st century forget-the-rules life in these United States.

Truly, the play becomes a mirror to our own family lives. Are we really this selfish? Isn't this the age of entitlement? Shouldn't each of us as individuals want to be all we can be? Can't somebody else be the one who has to sacrifice for the family? And in the Me Generation, exactly what is the family's place, anyway?

“Things I Know To Be True” runs through May 11, with performances at various times Tuesdays through Sundays at the Temple of Music and Art, 330 S. Scott Ave. Ticket are $25-$66. For details and reservations, arizonatheatre.org 622-2823.

Posted by TucsonStage.com at 6:10 PM