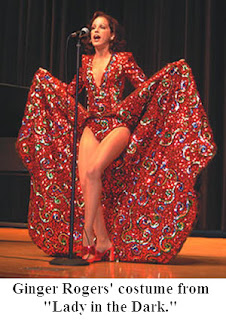 From the 1930's to the 1960's, Hollywood directors were told to "put the light where the money is" and this often meant spectacular costumes.  Studios hired the biggest designers and fashion icons to bring to life the glitz and the glamour that moviegoers expected.

Edith Head, Adrian, Walter Plunkett, Irene and Helen Rose were just a few that became household names because of their designs.  In many cases, their creations were just as important as the plot of the movie itself.
Greg Schreiner is one of the most well-known collectors of movie costumes. He has appeared on numerous television shows and is Curator of Special Collections at the Hollywood Museum in Hollywood, CA.  His wonderful film costume collection houses over 300 masterpieces.  Greg shares his collection in the traveling show “Hollywood Revisited.”

Filled with music, memories and fun, the revue allows the audience to genuinely feel as if they were revisiting the days that made Hollywood a dream factory.  The wardrobes of Marilyn Monroe, Elizabeth Taylor, Julie Andrews, Gene Kelly, Bette Davis, Katharine Hepburn, Mae West, Bob Hope, Bing Crosby and Judy Garland are just a few from the vast collection that will dazzle the audience.

“Hollywood Revisited” is much more than a visual treat.  Acclaimed vocalists sing and dance to movie-related music while wearing the costumes.  Schreiner, a concert pianist, provides all the musical accompaniment and anecdotes about the designer, the movie and scene for each costume. The show has won critical praise from movie buffs, film historians and city-wide newspapers.

Posted by TucsonStage.com at 5:15 AM