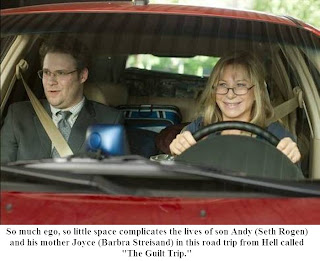 If your idea of fun is spending 95 minutes with an annoying mother and her yappy son, pony up for a ticket to “The Guilt Trip.” This is the one where Barbra Streisand and Seth Rogen (two different demographics, two different generations) combine their talents for portraying extreme Jewish naggers.

It seems to be happening more lately that movie writers refer to Rogen as “this generation’s Woody Allen.”

What are they thinking? Even though you might qualify both as Jewish guys feeling uncomfortable in public, Woody Allen was quite clever about it. Rogen is only crude.

True, Rogen’s willingness to flagellate himself  beyond belief might be considered a sort of extreme cleverness…like having a genius for being obnoxious…but do we have to admire it?

This is another one of those comedy teams born of market research. Streisand’s aggressively caring Joyce, dedicated to looking after every last whim of her son Andy (Rogen), brings in the senior citizen camp. Joyce does all the heavy lifting, setting up the jokes and then knocking them down, as well, while Andy just dithers about.

The plot, so to speak, is just a road trip with these two crammed into a subcompact car hitting several cities traveling coast to coast. By the time they cross the Mississippi River, you’ll be thinking “at least I’m halfway to the end of this so-called comedy!”

Actually, stay for the credits because they include some improvised comedy bits between Streisand and Rogen that are much funnier than the stuff that gets in the movie.