"IT'S A WONDERFUL LIFE" TO IMAGINE 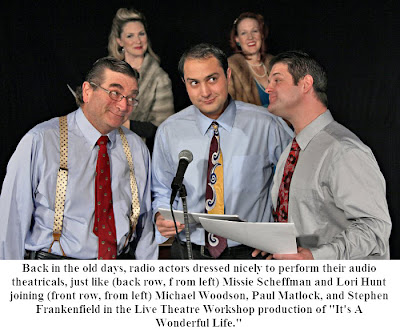 George Bailey will stride across the landscape of your mind in Live Theatre Workshop’s retro radio treatment of that sentimental Christmas favorite “It’s A Wonderful Life,” as directed by Sabian Trout.

Yes, we’re talking the Jimmy Stewart-Donna Reid 1946 movie in black-and-white, directed by Frank Capra, which has been a holiday TV staple for decades. Just a few seconds of that opening scene always fills my mind with scents of cinnamon and eggnog.

You can get the same feeling at LTW, though it might take just a little longer.

Properly titled “It’s A Wonderful Life: A Live Radio Play,” the stage version of the movie was conceived and written by Joe Landry in 1997. Ever since, theater companies coast to coast have warmly embraced it.

In the LTW production, five actors and a table full of sound effects equipment take over a stage designed to look like a 1940s radio studio complete with an “applause” sign to cue the audience.

The radio actors are dressed in period formal wear for the occasion to play about 40 different characters, changing their voices accordingly. Sometimes one actor will play two characters talking to each other. Instead of having a separate sound effects specialist, these hard-working entertainers also provide their own sound effects.

Sometimes you get the feeling their talents are being spread too thin, but that’s how they do it.

As an experiment, I would close my eyes and just listen, which did work pretty well in getting the “full picture” of George Bailey’s life-changing travels with Clarence, the Angel Second Class, who is working so hard to earn his angel wings and a promotion to Angel First Class.

The play itself hits all the movie’s mileposts as George the town’s most promising lad keeps having to set aside his own dreams in order to save someone else’s life. As the years become decades that rush by, filling George’s life with more frustration, he falls into near-terminal depression.

That’s when Clarence leads George from despair to triumph in the finest Charles Dickens fashion.

On opening night the LTW production drug its audience across some rough spots, but those should be smoothed out by now. Even then, the grand finale still swept up everyone in the spirit of Christmas -- which, really, is the best ending of all.

“It’s A Wonderful Life: A Live Radio Play” continues through Dec. 29 with performances Thursdays through Saturdays at 7:30 p.m., Sundays at 3 p.m., always at Live Theatre Workshop, 5317 E. Speedway Blvd. Tickets are $18, with discounts available. For details and reservations, 520-327-4242, or visit www.livetheatreworkshop.org

Posted by TucsonStage.com at 5:19 AM