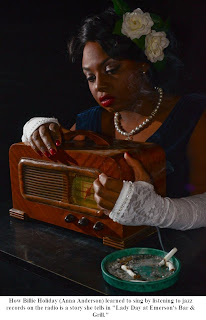 Heartfelt and hip, the Arizona Onstage production of “Lady Day at Emerson’s Bar & Grill” cuts to the bone of Billie Holiday’s artistic frustration while providing some touching renditions of “God Bless the Child,” “Strange Fruit” and other personal favorites from Holiday’s repertoire.

Anna Anderson holds the stage with confidence and an uncanny understanding of the pain Holiday must have known as her singing career dwindled into a confusing haze of alcohol and drug abuse.

The play written by Lanie Robertson and directed here by Kevin Johnson is filled with offstage details of Holiday’s life and the cruel 1950s double standard of being loved by white people for her singing and then being battered by racial prejudice when she wasn’t singing.

On this particular night in March, 1959, at scruffy Emerson’s in South Philadelphia, the 44-year-old Holiday is struggling to hang on. Anderson presents us with a touching portrayal of someone rudderless in life, though she was blessed with an intuitively strong jazz talent that is impossible to deny.

“I’m only happy when I’m singing,” she keeps telling us, sounding sadder every time she says it.
Anderson is able to capture all of the dueling happiness and sadness in Holiday’s performance. She sings intimate ballads that pull you right into the microphone, then she immediately turns into a cynical and sassy black woman fighting back against the injustices of racism and the cannibalistic music business itself.

She tells of her adored mother, nicknamed The Duchess by sax player Lester Young; of her bleak childhood; touring with the Artie Shaw orchestra in the deep south and being treated like a second-class citizen, then being hailed with high honors at Carnegie Hall; how she learned to sing by listening to jazz records; drug stories are in there, too.

There are no other actors, though the performance wouldn’t be called a monologue, or a musical review. As theater, it is a combination of powerful stories and compelling songs that define a fragile person of intuitive genius.

Johnson is committed to creating a down-at-the-heels saloon of the period in the convincing stage design by Michael Boyd, and lighting by Zach Ciaburri that conveys desperation, which is filled with mock cigarette smoke and some audience seating at small tables pulled up around the stage.

Other songs in the 95-minute show, performed without intermission, include “Crazy He Calls Me,” “What A Little Moonlight Can Do” and the Bessie Smith tribute, “Gimme A Pig Foot.”

Posted by TucsonStage.com at 5:13 AM