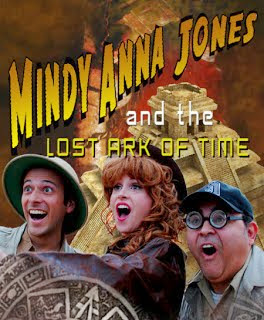 Out at the Great American Playhouse they are plowing new ground in the traditional melodrama format. This new theater in Oro Valley does take a lot of its style cues from the eastside Gaslight Theatre, but onstage the GAP shows – all written and directed by Nick Seivert – are evolving into something quite fresh and imaginative.

It's not just cowboys of the Old West saving damsels in distress anymore. Nostalgia truly isn't what it used to be – although the hardy bones of basic melodrama haven't changed.

Those gleaming heroes and dastardly villains are still there. So are the comic sidekicks and dialogue filled with groaning puns. And if the actors keep acting all loosey-goosey with their lines...well, the audiences always seem to like it.

Take the new GAP show “Mindy Anna Jones and the Lost Ark of Time,” for example. Not only is Mindy a daring archeologist hero just like Indiana Jones but...she's a girl (or, to use the more politically correct term, a female).

And those damsels in distress aren't always damsels, either.

Nearly all the roles are double cast, as always. At the performance I attended, Mindy (Jennifer Ackerley Lawrence) with her colleagues Cade (Brian Paradis) and Chang (Jesus Limon) discover the Lost Ark and pretty soon thereafter must deal with powerful Montezuma (Seivert) and his wife Augusta (Amy DeHaven) zapped 3,000 years into the future...which would be somewhere around 1990.

Before you can say “When's intermission?” Mindy and her pals are shot back into the past about 3,000 years to find the Great Temple, the Ark and the Key, which will unlock just about everything.

But first there are three difficult challenges and numerous evil intentions to conquer, all of them cleverly staged without using any special digital effects or other elaborate technology. This home-made quality in the stagecraft is also a part of the charm for traditional melodrama.

The song list borrows heavily from pop and rock favorites, including the Devo hit “Whip It” – both Mindy and Indy know how to use a bull whip – “We Are the Champions,” “We're Not Gonna Take It” and “I'll Be There.”

Also and essential part of melodrama is the aftershow olio when all the cast members do their own variety show. For this run the olio is dubed the “Rock 'n Rollio,” opening with an energetic “Big Girls Don't Cry.”

Venturing into soul and Motown as well, there are numbers featuring “Where Did Our Love Go?,” “Stop! In the Name of Love,” “You've Lost That Loving Feeling” and that ultimate summer song, “Where the Boys Are.”

Posted by TucsonStage.com at 9:56 AM