"I LOVE YOU, YOU'RE PERFECT, NOW CHANGE" IS NOSTALGIC FOR ROMANCE 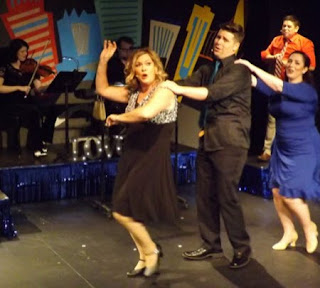 From left, Jodi Darling, Tyler Wright and Kelli Workman. In back, in orange, Chach Snook.

Unabashed nostalgia for domestic life before there were internet hook-ups and transgender dating is the tonic of the day in Roadrunner Theatre's ambitious new production of the chamber musical “I Love You, You're Perfect, Now Change.”

The popular Off-Broadway show comprised entirely of songs and skits casts a whimsical eye on the new rules for romance after the sexual revolution. It played the Big Apple from 1996-2008 with more than 5,000 performances. Yes, the 1980s have now become the good old days.

Those winning ways are bubbling up in Roadrunner's production at the new APCOT Theater way out east, 8892 E. Tanque Verde Road, in the strong cast of Jodi Darling, Chach Snook, Kelli Workman and Tyler Wright.

Snook is doubling as director, keeping a light touch on the rear view mirror of life. Written by Joe DiPietro, with music by Jimmy Roberts, the creators assume that despite all the romantic problems and humorous mix-ups everyone has in Act One, everyone will end up with a mate in Act Two and share the matrimonial experience for better and for worse.

Workman is also listed as choreographer, bringing body language and dance steps appropriate to all the characterizations.

Of course, scenes with the couples who fare the worst provide us with the most laughs. Who doesn't enjoy that, maybe with more than a touch of recognition in our own lives.

All four performers have roles that take them from being young professionals with a future, eager to taste every flavor in the candy store, to being oldsters cast adrift and alone by circumstances beyond their control.

One of the earlier skits has a couple on one of their first dates, going through all the awkward conversations and dinner courses. We hear what they say to each other, and we hear what they think to themselves.

This lovely meal is not going well for either of them, but she is still hopeful. The entree has just been served when she sings, “He might get better by dessert.”

In Act Two the bloom is off the marriage. Some people are better than others at handling the practical side of keeping a home together. There are happy skits and more bittersweet ones.

But the message in them all is that each of us must keep trying to make that connection. Otherwise, what is the point, really. This is the thoughtfulness that gives purpose to “I Love You, You're Perfect, Now Change.”

Musical accompaniment is provided by Geoff Gale, keyboard, and Callie Hutchinson, violin. The stage setting is spare yet effective, with a variety of tables and chairs moved on and off every few minutes as the skits change.

There are some technical issues with sound quality when doing musicals in the APCOT theater, which is still a work in progress. But problems of balancing the voices and musicians, etc., should be resolved over time.

Posted by TucsonStage.com at 2:19 PM