A SWEEPING "MACBETH" AT THE ROGUE 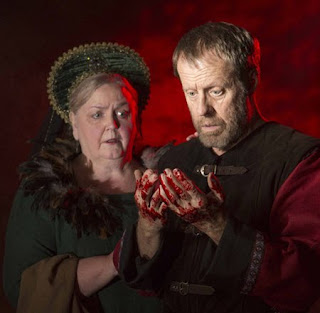 Cynthia Meier as Lady Macbeth and Joseph McGrath as Macbeth ponder what to do next.

A banshee trio of witches, rolling clouds of fog pouring over special stage effects and bloody bodies, a very convincing ghost, the clashing of swords against shields, topped with blood-curdling screams that electrify the atmosphere to make this “Macbeth” the most sprawling of Rogue Theatre's spectacles.

At least, that's how it seems, with Joseph McGrath commanding the madness in his portrayal of the driven king. There is by turn the passion of surprise, the regret of calculated murder, the panic of events turning against him. As reactions roll across McGrath's face, they become the map of this Shakespeare classic.

While the Rogue is always noted for its understated set designs and intense acting, this ambitious company has pulled out all the stops for this production directed by Matt Bowdren. The rich imagery of the language that shapes the mental turmoil of the characters is always at the center of attention, the production's shadowy trappings are what amplify the actors' emotions.

Momentum shifts with the power of a changing tide as Macbeth, at first encouraged by the predictions of those restless witches, finds his kingly power to be a slippery weapon difficult to control.

The fatal flaw of his own ego does bring to mind our own nation's President wrestling with how best to use to use the power of his office.

In sharp contrast is the icy Lady Macbeth (Cynthia Meier). Her steely resolve behind the scenes adds a horrific element to the swirl of falling bodies. The phrase “cold blooded” acquires a name and face in her actions.

If Hillary Clinton had won the presidential election we would be comparing her heartless calculations to those of Lady Macbeth. But even without that coincidence, this “Macbeth” still feels current reminding us how, early in Act One, Macbeth even didn't want to be king.

But after the witches' prediction early in Act One, he was drawn to the power of the throne. He became quickly addicted to those privileges. Royal recklessness followed because, after all, once he had everything it was never enough. He wanted more.

Playing those three witches, hiding themselves  behind the anonymity of wearing grotesque masks designed by Aaron Cromie, are Holly Griffith, Grace Kirkpatrick and Claire Hancock. Not only is their appearance striking but their wailing and writhing will stay in your mind for quite a while.

Among the supporting roles, Matt Walley stood out as the tortured Banquo, projecting a fearsome silence for the stalked and haunted Macbeth.

Ryan Parker Knox as Macduff and Sterling Boyns as Malcolm -- the survivors in this Scottish battle -- had a satisfying warrior's presence to balance McGrath's portrayal of a tortured leader at war with his own destiny.

“Macbeth” runs through May 14, with performances at 7:30 p.m. Thursdays through Saturdays, 2 p.m. Sundays (additional 2 p.m. Saturday matinees May 6 and 13) at the Rogue Theatre in the Historic Y, 300 E. University Blvd.

Tickets are $35, with $15 student rush tickets 15 minutes before curtain, when available. For details and reservations, theroguetheatre.org or 520-551-2053.

Posted by TucsonStage.com at 5:25 AM