TAMING THIS "SHREW" WASN'T QUITE ENOUGH 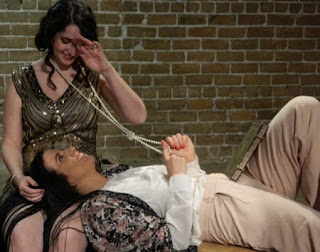 Robin Carson (left) can't help flirting with Naima Boushaki in "The Taming of the Shrew."

Sometimes having your heart in the right place just isn't enough. No matter how well intentioned your motives might be the end result doesn't bear much fruit, if not for want of trying.

Tucson theater veteran Esther Almazan wanted to stage a lesbian-themed adaptation of Shakespeare's “The Taming of the Shrew,” switching the play's viewpoint to emphasize Katherina's marathon of suffering during her rough-and-tumble courtship by Petruchio.

Almazan calls Katherina's final monologue, where she caves in to all her rough-hewn suitor's final demands, “cringe-worthy” and “sexist.”

Almazan also wanted to do something about the long sequence where Petruchio breaks Katherina's independent spirit by starving her, freezing her and several other deprivations until she finally accepts her husband as her master.

Remember back in the 1970s how Cinderella was severely taken to task by the feminist movement because she just waited around for her prince to come instead of taking a more pro-active attitude?

Well, in this century it is Shakespeare's turn to be put in the feminist stocks for making Katherina endure such misogynistic suffering.

The “Director's Notes” in the program make Almazan's ambitions clear, so the notes are read and off we go. She sets her production in the 1920s, a time when anything goes (as we know from the song), although the costumes and stage sets aren't quite up to the task of creating a wild and reckless atmosphere.

Maybe if the young cast had more experience handling the Bard's 450-year-old sentence structure, the whole idea of “Shrew” being about the suffering of Katherina (Naima Boushaki)   instead of the triumph of Petruchio (Nick Watts)  might have been more clear.

It is true I did see the show on preview night, which is more of a test drive than a full-throttle journey. The actors are sure to improve some through the run, but Shakspeare's language won't be changing. He makes sure we always know Petruchio is in charge.

At the start, Boushaki does get the no-nonsense attitude of a woman who has no time for any man's foolishness and arrogance. But during her transformation, that spirit disappears. She says the lines with an acceptance of her fate. Just like in all the other thousands of performances ever staged anywhere on Earth.

In an earlier radio interview Watts said he thought Katherina became the perfect victim of the Stockholm Syndrome, loving the person who imprisoned her. Maybe so, but there is no sense of that in Almazan's adaptation.

That's not to say Almazan doesn't have a good idea here. In today's tense culture, if Katherina could turn the tables on Petruchio, she would be praised around the world and celebrated endlessly on Facebook. Instead of a hit movie called “Shakespeare in Love,” we'd have “Shakespeare in Transition.”

None of that has happened yet. But this production does move us a step closer.

Shakespeare's “The Taming of the Shrew” as adapted by Esther Almazan runs through May 14 at the Steinfeld Warehouse Community Arts Center, 101 W. Sixth St. Free parking is available in the large paved lot across the street.

Performances are 7:30 p.m. Fridays and Saturdays, 2 p.m. Sundays. Tickets are $22, with discounts available. For details and reservations, somethingsomethingtheatre.com, or 468-6111.

Posted by TucsonStage.com at 4:31 PM