"BELOW THE BELT" IS A FUN WAY TO FEEL SMART 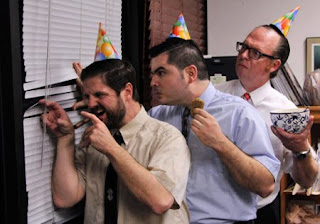 "Below the Belt” is a comic tale from the time of typewriters, a whoopee cushion across the face of corporate America but done in the true passive/aggressive style appropriate to office culture – a sneaky place where everyone must appear to be a team player with no interest in personal advancement.

Written by Richard Dresser and first performed off-Broadway in 1996, “Below the Belt” is set in a relentlessly desperate low-budget offshore office outpost of an international company manufacturing some unidentified product at high-volume output, recklessly spewing pollution into the exploited environment. Who cares? It's a foreign country.

Described as a cross between that TV show “The Office” and the absurdest theater of Samuel Beckett – particularly “Waiting For Godot” which could be re-titled “Waiting For A Promotion” – “Below the Belt” thrives on the Live Theatre stage as a skin-tight ensemble piece performed by Stephen Frankenfield, Steve Wood and Matthew C. Copley, with direction from Annette Hillman.

Filled with the bleakness of Beckett, this particular monochromatic gray office space is ingeniously designed by Richard Gremel to include an employee barracks room, work bay, the boss's office, an outdoor bridge and a construction truck tire that doubles as a bench and employee rest area.

Being assigned to an overseas outpost might sound romantic when you're stuck in the midwest headquarters of some generic widget manufacturer, but it is clear from the outset that this assignment is not one of those.

Frankenfield is giving one of his favorite vein-popping, teeth-gnashing, jaw-grinding performances as Hanrahan, the ambitious guy so determined to get promoted that he is suspicious of everything and everyone, every hidden motive and inscrutable strategy.

Wood, at the opposite end of the personality spectrum, is Dobbitt the new guy. All he wants is to get along with everybody and not upset anybody. Of course this attitude makes Hanrahan green-eyed with suspicion of Dobbitt at every turn.

The truly sinister one is Merkin (Copley), the boss. He is lusting after influence in the home office and knows the only he will ever get out of this remote assgment is to make these two pitiful employees amount to something. His strategy is to keep Hanrahan and Dobbitt believing the other one has the upper hand.

Anyone who has ever worked in any kind of office setting with a couple of other people and a weekly paycheck at stake will be endlessly laughing at the struggles of all three men in their silent competition to get some leverage over the other two.

No casual word or gesture goes unnoticed. If one makes a joke the other one must make a funnier joke. If one gets a quick reply to an office memo, the other one must get a quicker reply. If one talks about how much his wife suffered in childbirth, the others must tell how their wives suffered more.

There is some plot business about getting invited to the company party and meeting the many employees whose successful careers have nothing to do with these three. The chemical-filled river does catch on fire one time and some native animals are bent on invading the compound,

But really, the fun of “Below the Belt” isn't in the plot but in the machinations as each of these men keeps trying to get a grip on his desperate life.

“Below the Belt” runs through May 6 with performances at 7:30 p.m. Thursdays through Saturdays, 3 p.m. Sundays, at Live Theatre Workshop, 5317 E. Speedway Blvd.

Tickets are $20, with discounts available. For details and reservations, 327-4242 or visit livetheatreworkshop.org

Posted by TucsonStage.com at 4:29 PM