THIS CARIBBEAN "CURSE" HAS A REAL HOOK 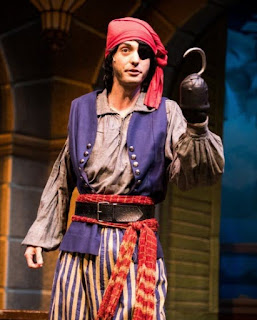 Jacob Brown flaunts his hook as Gibbet in "The Curse of the Pirate's Gold."

Arrrrr you ready for some pirates? Especially one that looks like he stepped out of a heavy metal rock band from the 1970s?

Arrrrr you ready for some pirate jokes? Like, “Where does a pirate do all of his shopping? At Tarrrrrget!” “What kind of socks does a pirate wear? He wears Arrrrrgyles!”

Or maybe a pirate who can't resist adding some blues harp to his singing – a knack he surely picked up in some of those questionable Caribbean grog ships. That would be Mike Yarema as the notorious Dryrot.

The rock star pirate with the swashbuckling layered look and long locks of curly hair is, of course, Armen Dirtadian, the Gaslight Theatre's own legendary matinee idol of yore, hoping he lives long enough on the high seas to retire and join A.A.Rrrrrr P. He plays the spirited Captain Scuttle.

Yes, dear reader, it is time for a new Gaslight production of “The Curse of the Pirate's Gold,” written and directed by Peter Van Slyke, enhanced by scenes of rope swinging, sword slinging and cannonball flinging like you've neverrrrr seen before (well, actually you have, but not for several years).

The whole gist of this sea faring tale is about dealing with the uptight British officer Captain Spaulding (Todd Thompson), who is given to some seriously dastardly behavior toward his men.

Once the feisty tavern lass Molly (Erin Thompson) signs up for the Pirate Way, joining Captain Scuttle, Dryrot and Gibbet (Jacob Brown) who is an old sea dog of uncertain heritage, things begin to happen.

But first some pirate justice must be served on board Captain Spaulding's ship, the Regal Eagle, as the unfairly imprisoned Dr. Bartholomew Steele (Jake Coffin) wins his freedom and chooses to join this arty band of singing and harp-playing nautical naughty men.

If only there had been show boats in the Caribbean like they had on the Mississippi River, this musical group of deck monkeys could have made their fortunes as entertainers instead of pirates.

That curse mentioned in the title can only be lifted by the ever-so-proper and deceptively dazzling Miss Prudence Fairchild (Janee Page). It's all about the amulet on a ribbon round her neck.

Well, before all this gets sorted out and good triumphs over evil in its own sunshine salty way, you can count on hearing white-capped adaptations of “The Girl Can't Help It ” (she wants to be a pirate), “We're Out Here Havin' Fun (in the warm Caribbean sun),” “Sail On, Sail On, Sailor,” “Let Me Take You On A Sea Cruise,” “I Just Want To Drink Rum All Day” and the encouraging “Come On and Rescue Me.”

The aftershow olio is another kind of mind trip, dedicated to that happy TV family, “The Brady Bunch.” All six kids are represented – three of each kind – as well as Alice the maid who has a thing going on with Sam the butcher.

And if that's not enough, this Brady Bunch also receives visits from the Partridge Family, the “Welcome Back, Kotter” gang and Kermit the Frog.

“The Curse of the Pirate's Gold” runs though June 4 with performances at various times Tuesdays through Sundays at the Gaslight Theater, 7010 E. Broadway. Tickets (plus tax) are $19.95 adults, $17.95 students, seniors and military, $9.95 children 2-12. For details and reservations, 886-9428, or visit www.thegaslighttheatre.com

Posted by TucsonStage.com at 6:31 AM