Arizona Citizens for the Arts: SAVE the NEA: More work to do

From: Arizona Citizens for the Arts <info@azcitizensforthearts.org>
Sent: Tuesday, November 28, 2017 9:05 AM
Subject: SAVE the NEA: More work to do

Let's keep the pressure on!

Congratulations to the arts advocates who've contacted their members of Congress to ask them to reject White House proposals to eliminate the National Endowment for the Arts (NEA) and other federal cultural agencies.  Americans for the Arts' Arts Action Fund members, alone, sent a record number of 187,115 e-mails to Congress this year to #SAVEtheNEA, and it is working.

These emails and many personal visits to every member of the House and Senate helped to secure a $145 million allocation in the House budget proposal on July 18th for the NEA and the National Endowment for the Humanities (NEH), and $150 million allocation for each in the Senate proposal this month. Also included is significant funding for other federal cultural agencies that are at risk in the White House budget.

However, these budget negotiations are just one of many efforts ongoing right now in the Congress that could impact nonprofit arts and culture organizations.

Congress has set a deadline of December 8th to pass legislation to fund government agencies and programs, including the NEA, NEH and other culture agencies.  By then, they must either pass a budget, or further extend the deadline to keep the government running. Also in play are possible veto threats from the President, Senate passage of a tax reform proposal, disaster recovery funding, money to "build a wall," and the need to reach increase the federal debt ceiling. 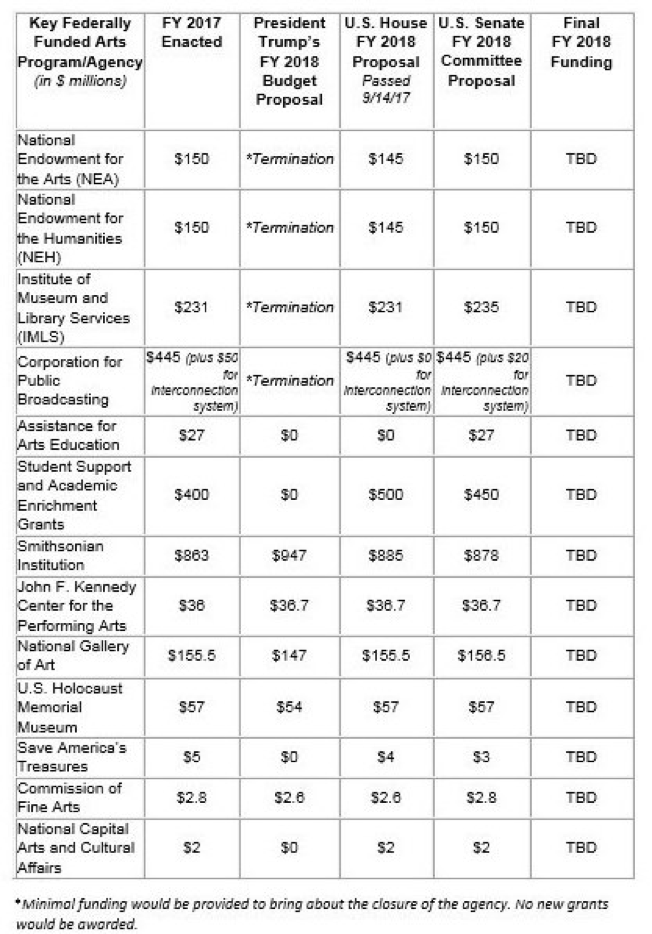 Right now, we need arts supporters to do three things:

Please feel free to customize your note to Congress with information about your support for the other federal cultural agencies noted in the graph here.

Posted by TucsonStage.com at 2:03 PM