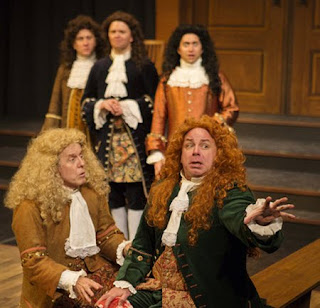 photo by Tim Fuller
The top organist job in Germany is open and all these guys want it. They are(from left, front) Joseph McGrath as Fasch, David Weynand as Graupner, (from left, back) Matt Walley as Lenck, Ryan Parker Knox as Schott and Hunter Hnat as Steindorff

You needn't know anything about classical music to get all the jokes in the Rogue Theatre's farcical fugue of silliness “Bach At Leipzig.” The stage setting is an imposing pair of towering wooden doors at the Thomaskirche in Leipzig, Germany, in June, 1722. The play's tone is set by the ridiculous wigs and delightfully over-designed costumes of all seven characters.

Just as the Thomaskirche (St. Thomas Church) is a real place in Leipzig you can visit today, so is the incident on which “Bach At Leipzig” is based – replacing the church's organist Johann Kuhnau who died unexpectedly in 1722. Bach was eventually selected to the post.

Everything else in the play is made up with a frisky spirit by 30-year-old playwright Itamar Moses, who keeps getting compared to Tom Stoppard.

Moses imagines what might happen if seven prominent German musicians gathered before this imposing church to apply for the prestigious position. All the baser emotions for which the human heart is capable are stirred by the desirability of this opportunity. Godliness receives considerable attention, but very little respect.

“Bach At Leipzig” made its New York City debut off-Broadway in 2005. The play is a few steps below, say, “Rosenkrantz and Guildenstern Are Dead,” but for a fun evening that will leave you feeling smarter than when you came in, put your money on the Rogue's production.

Getting the juiciest opportunity to act the most ridiculous is Michael Bailey as Georg Friedrich Kaufmann. Whether or not you understand what he's up to as the most daft of these candidates, Bailey gets his laughs.

The all-male cast (including Holly Griffith as The Greatest Organist in Germany) fills the stage with preening arrogance and hilariously logic-stretching arguments such as the importance of maintaining the Church's traditions rather than cutting loose with something new and innovative.

However, “Bach At Leipzig” as directed by Cynthia Meier is a total ensemble effort. Each man gets at least one star-turn scene as the plot's level of desperation keeps rising.

Joseph McGrath as Johann Friedrich Fasch is convinced he is the rightful heir to this multi-keyboard throne. Matt Walley as Georg Lenck personifies the court musician as con artist. He's going to be as good as he can make you believe he is.

Hunter Hnat plays Johann Martin Steindorff, organist from a wealthy family happy to buy his way into everything. David Weynand is hapless loser Johann Christoph Graupner. The harder he tries the worse everything gets.

But mostly Moses the playwright just wants to have fun making sport of what the eighteenth century valued in its church music and in life. It is the life part that convinces us human nature hasn't changed much in the last 300 years.

“Bach At Leipzig” runs through Nov. 19 with performances at 7:30 p.m. Thursdays through Saturdays, 2 p.m. matinees Saturdays-Sundays, at the Rogue Theatre, 300 E. University Blvd. Tickets are $38; student rush $15, on sale 15 minutes before each curtain, when available. For details and reservations, 551-2053, www.theroguetheatre.org

Posted by TucsonStage.com at 5:12 PM