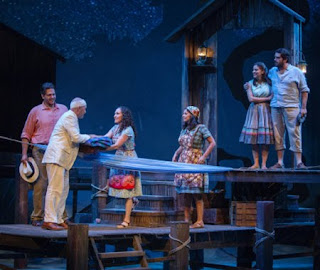 It is difficult to describe in just a few words all the rewards of seeing the enchanting Arizona Theatre Company production of Marisela Trevino Orta's mystical and metaphorically haunting “The River Bride,” a cautionary tale for adolescent girls of every culture whose hearts are yearning for something more.

Set mostly on the weathered boat dock of a humble family that has been scratching out its existence along the steamy river banks of aBrazilian village on a remote curve of the Amazon River, the cinematic production hearkens back to a time when theater could be both intoxicating and meaningful.

Intoxicating in the sense its set designs are filled with a natural beauty that matches the plain-spoken poetry of six people representing two generations of a family living simply, depending on the restless muddy currents of the Amazon to provide for their survival.

The Amazon also provides these people with folklore tradition, for the old ones in this village believe the river dolphin who swim up upstream from the sea are lost souls forever wandering, able to see very little in this perpetually cloudy river.

Because of a painful curse, though it may be a blessing, every June some of these dolphin take the form of young men. For three days they can live among humans on the river banks. During that time if they find a female to marry, the fish will be allowed to live out the rest of their lives as married men. Otherwise they must return to the river, become fish again, and wait until next June.

As eligible bachelors are rare among these outposts of human civilization, blossoming young women might be lucky enough to meet such a charming beau, one who hasn't been warped by the difficulties of growing up in these remote jungle reaches. The dolphin men are a sophisticated lot, both sensitive and worldly.

Any girl would find one a fine catch (so to speak), but would she be happy knowing deep down inside that he actually was a river dolphin? Well...the heart is a lonely hunter.

For the audience, keeping these family roles separate can be a little tricky, as all the cast members look to be about the same age. Belmira stands out as the ambitious one who has every intention of finding her own eager young man to marry and head directly for some big city excitement.

In fact, her wedding to the villager Duarte (Sean Burgos) is in three days. Her bags are packed and she is ready to fly. But then, what-ho, there comes up from the river a well-spoken man in a white suit, with a bandage on his head that he mostly keeps hidden under his hat.

Immediately Belmira is captivated. And why not. She is the cute one, the show-off who gets all the attention. She is used to having her own way.

But this mysterious man known as Moises (Hugo E. Carbajal) is more attracted to the quieter Helena with her polite manner and sincerity.

Yet the plot of who gets whom is not really the point. Both young women portray such strong yet fearful longing as the story winds without intermission to its conclusion, feeling as poignant and contemporary as a tale of true love told in modern times.

It is this very timelessness that gives “The River Bride” its power. We in our air conditioned homes and cars are no different, really, from these mythic figures on stage whose hopes do not come with electricity.

Playing equally important roles are the set design by Regina Garcia combined with the lighting and rear-screen projections of David Lee Cuthbert. Be sure to arrive at the theater a little early just to absorb this artistry that fills the ATC stage with shimmering mystery before the play even begins.

“The River Bride” runs through Nov. 11 with performances at various times Tuesdays through Sundays. Tickets are $25-$63. For details and reservations, www.arizonatheatre.org or 622-2823.

Posted by TucsonStage.com at 5:11 PM