"HERMAN THE NATURALIST" EXPLORES IMAGINATION AND THE IMPORTANCE OF NATURE 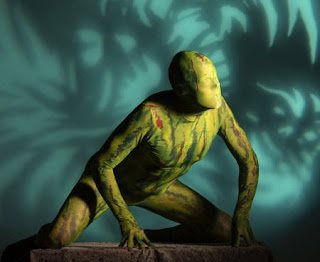 Grant Bashore in "Herman the Naturalist."

There are many ways to receive a message. Mime artist Grant Bashore believes in the power of theater to intensify the message's speed and directness to its target audience.

Which quickly brings us to the world premiere of “Herman the Naturalist,” written, directed and performed by Bashsore, with performances running through Oct.11 in the Scoundrel & Scamp Theatre.

Working alone on a bare stage enhanced by a soundtrack and lighting effects, the artist creates five characters that have been touched by the transformative power of nature. Each one brings us another perspective on what is actually important in life.

Does it feel like your cell phone is dominating your life these days, becoming the new demon of isolating digital technology? Bashore goes for a more timeless period, reaching back nearly 100 years to the 1930s and stories about his father's eccentric great-uncle Herman.

In the program notes, Bashore adds the importance of a two-year-old memory from the Hawaiian islands, where he found plastic bags, bottles and buckets washed onto a pristine island beach by a winter storm. And later the same day he discovered a pair of sea turtles disfigured by growths possibly caused by the Fukushima nuclear disaster of 2011.

To Bashore, the combined experiences proved no one and no creature is safe anymore from civilization's destruction of our planet. Just like wi-fi and the internet, this destruction is everywhere. We can't escape it.

Hope is what Bashore's performance adds to the equation. While there is no shortage of examples of extinction, Bashore the artist also finds evidence of nature's power to keep re-inventing itself in more creative ways.

This is the heart of “Herman the Naturalist.” running about 105 minutes plus intermission, most of the performance is done in mime, with a few props and some brief monologues giving us clues to each particular place and character.

The “cast” includes Herman, Herman's father, mother and older brother. There is also the mysterious “T,” described as “a Cascidian Captain.”

One of Bashore's most fantastic tales is absolutely true. Herman, in the 1930s, did study taxidermy and did convert an old school bus into a traveling history museum. He drove that fanciful vehicle up and down the Pacific coast for more than a decade, charging children five cents to see his exhibits.

So...does it seem like watching YouTube clips of birds and butterflies in your bedroom at home would be more beneficial than Herman's dedication to teaching kids about the wonders of nature with his bus displays? You decide.

We know Bashore is dedicated to theatrical show-and-tell. He knows there are many ways to send a message, too. You can feel that dedication in his presence on stage.

Tickets are $30 general admission, $28 seniors 55+, $15 students and teachers. For details and reservations, scoundrelandscamp.org/herman

Posted by TucsonStage.com at 5:26 AM