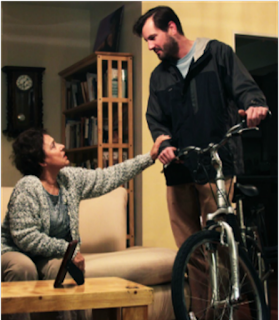 Maybe too subtle for its own good, but loads of fun to discuss afterward, “4,000 Miles” does call for your patience but also provides a nice reward. As the winner of an Obie and a finalist for the 2013 Pulitzer Prize in Drama, the play compares leftist attitudes of radical communist supporters in the 1940s with today's progressive activists more concerned with America's attitudes toward gender and race.

Is one more important than the other? Does the history of one hold any implications for the coming history of the other? Can we actually learn anything from contemplating any of this?

There is the part where Vera gruffly calls Leo's sensitive philosophizing “New Age baloney,” but Leo gets in his licks, too. He looks at the collection of communist tomes written by Vera's late husband and finds them quaint.

Amy Herzog the playwright is too determined not to take sides in this philosophical debate. But the hippies did seem to be having more fun than today's tight-jawed feminists and racial score-card keepers.

Tucson's most daring new company of thespians, the Something Something Theater led by Joan O'Dwyer, fearlessly raises its own bar of expectations by presenting “4000 Miles” in the downtown Cabaret Space at the Temple of Music and Art.

DDavis is cast as 91-year-old Vera, a lifetime denizen of Greenwich Village living in a rent-controlled apartment. Feeling as committed to the cause as ever, she recalls that sentimental image of the old firehouse dog who sleeps all day but is instantly ready to run when the fire bell goes off.

Eric Everts plays Leo, 21-year-old grandson of Vera, who arrives unannounced at her apartment in the middle of the night, carrying the bicycle he has just ridden from Seattle. He did stop first at his ex-girlfriend's Manhattan apartment, but she threw him out.

While “4000 Miles” contains no echoes of “Harold and Maude,” there is a kind of wary understanding that does develop between the fading Vera and needy Leo. She recognizes his outsider status, sees through the veneer he tries to project for protection.

Leo is convinced he is helping his grandmother just by showing up. And in some ways, he is. Additional complications pop up when Leo's ex-girlfriend Bec (Meagan Jones) does show up at Vera's place.

And there is the night Leo brings home an even younger pop culture progressive, Amanda (Samantha Orzech), whose ideas come with a right wing rigidity.

There is a resolution of sorts to this demand for change across the generations. That demand to divide us into winners and losers is inherent in the American personality, a carryover from our frontier past when only the winners survived.

But there is also the implication that all this agitation hasn't accomplished much of anything. That maybe Facebook is right, the real winners are the bankers, the military-industrial combine, corporate executives, Wall Street's money manipulators...

“4000 Miles” continues through February with performances at 7:30 p.m. Fridays and Saturdays, 2 p.m. Sundays, in the Cabaret Space at the Temple of Music and Art, 330 S. Scott Ave. Tickets are $22, with $4 discounts for students and seniors. For details and reservations, 520.468.6111, or visit somethingsomethingtheatre.com

Posted by TucsonStage.com at 3:49 PM