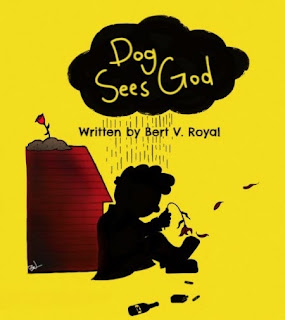 Last week's surprise theater hit of early 2016 is “Dog Sees God: Confessions of a Teenage Blockhead,” an off-Broadway success in 2005 written by Bert V. Royal, in a fine local production by a cast of “mostly Catalina Foothills” students directed by Stefanie Tedards.

“Dog Sees God” is the debut production of Acting Innocent Theatre, a new company of young adults “looking to cause social change in the Tucson area through theater.

“Acting Innocent aims to appeal to a wide range of audience demographics while also working to ignite artistic passion among young adults by visiting schools and performing material which any generation can connect with.”

Lofty goals indeed, but the quality of this group's first production is encouraging. The play itself imagines all the main characters of the “Peanuts” strip as high school upperclassmen, with their names changed a little bit in order avoid being sued by the “Peanuts” corporate owners.

CB wears a yellow shirt that looks exactly like the one Charlie Brown wore. Van is a reclusive piano student who loves Chopin. Changes like that.

Being adolescents now, the daily problems of these kids involve suicide, teen violence, eating disorders, drug use, rebellion, sexual relations, child sexual abuse and that never-ending search for identity. Most refreshing is the candid language Royal has provided.

These teens make the most of their opportunities. Scenes that have a startling rawness become heartfelt when this cast does them. Clearly they all care about the characters they portray. And so, we care, too.

Posted by TucsonStage.com at 7:13 PM