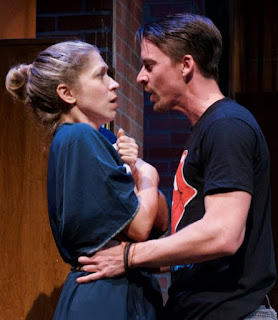 Heather Lee Harper and Tyler Eglen wonder if what they read online is real.

Olivia is proud of maintaining her high standards but can't help casting a nervous eye back over her shoulder at the lengthening years of little success. The tepid critical reception of her first book has shaken her confidence.

Ethan says he loves literature and particularly loves Olivia's first book. But he loves financial success more, and we are led to believe he loves sex even more than that. Eason leaves us wondering about Ethan's true motives when he meets Olivia alone in the empty lobby of an isolated bed-and-breakfast writers' retreat during a fierce Michigan snowstorm.

“Sex With Strangers” had its premiere production in 2011 at Chicago’s Steppenwolf Theatre and played off-Broadway in 2014. ATC brings us a collaboration with the Stray Cat Theatre in Phoenix. Ron May, the 14-year-old Stray Cat's co-founder, is directing.

Even with all the talk between Ethan and Olivia about having high artistic ideals and ignoring the pressure to compromise those values just to get published or whatever, right from the beginning there is an electric connection between them. Make that an animal attraction.

Lithe of frame and laced with muscles, Ethan's unabashed sexual aggression meets little resistance from Olivia – especially when he starts quoting passages from her own book. Does he truly admire her work? Or is he simply accomplished at seeming sincere?

After passion's first blush is satisfied, they have to talk about something over the next few scenes as they wait for the storm to pass and the electric power to be restored. But instead of answering any of Olivia's questions, Ethan pours on more charm. Eventually Olivia stops asking questions and just enjoys the ride.

It is this is-he-or-isn't-he quality that keeps driving the plot ahead. Ethan suggests he can take Olivia's first novel, change her real name to a pen name, and publish it as an ebook. Then he will write waves of email raves to create an online buzz and the ebook's popularity will take off. Ethan is ecstatic with enthusiasm.

Olivia isn't so sure. It isn't really published just because it is an ebook....is it? And all those favorable comments Ethan will write aren't really valid praise, like real book critics would provide.

Ethan is furious she can't see the opportunity. Olivia begins to suspect a scam. Or maybe all Ethan really wants is more sex.

After intermission, the question of when is an ebook as important as a real book is overlaid with more essential questions of Ethan's online personality as a selfish sex abuser. Is it just an act? Is it the real Ethan? Does it even matter?

And how much would Olivia's attitude change if her writing was published on paper?

Both actors create believable roles here. Ethan makes more noise, but we watch with compassion as the introspective Olivia struggles in more subtle ways to know what she really wants.

Posted by TucsonStage.com at 3:50 PM