STAYING RELEVANT AFTER RETIREMENT IN "DEELMAYKER" 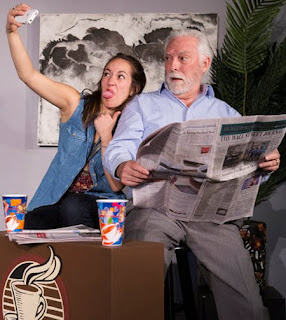 Aimed squarely at the boomer generation as it ages into retirement and beyond, “Deelmayker” strikes a defiant blow against today's youth culture and its obsession with digital doodads and instant everything

Budding playwright Warren Bodow (himself an executive in retirement) echoes the sentiment that attention must be paid today to the people who made the deals that mattered years ago. But he presents the message in a lighthearted way and Invisible Theatre is on hand with this sprightly world premiere production to speed the word along.

Popular IT performer Jack Neubeck is thoroughly identified with the role of Bernie Harris, a former media broker recently retired to Palm Springs and thoroughly bored with himself. In a sense he is suffering with a commercial form of drug withdrawal – hooked on the multi-million dollar adrenalin rush of closing a new deal.

His internet password is DEELMAYKER. If he isn't working on a deal he doesn't exist. It's all pretty clear to Bernie's wife Anne (Kathleen Erickson) that her man is less than a shell of his formerly dynamic self.

In to stir the soup and get the plot moving is Bernie's flamboyant sister Harriet (Kylie Arnold) who adores her brother and just can't stand to see him so disconsolate. Her own larger-than-life personality shakes up Bernie's meaningless daily routine.

Bernie learns of this and offers to find a buyer willing to pay the top price for Emory's company. Emory says Bernie should come to Boston. Bernie, full of pride, says Emory must come to Palm Springs.

Tensions build. Anne wonders if their marriage is on the rocks. But Bernie can't believe in himself if Emory won't believe in Bernie.

The playwright's dialogue offers such life lessons as Bernie explaining how selling is selling, whether it is for millions of bucks or just for bucks. The successful deal brokers see opportunities the other brokers don't even see. And they have complete confidence in themselves.

By the time we get to the denouement, we're cheering for Bernie just like we did for Rocky in those boxer movies. Only this time we are fighting for Bernie's relevance. A guy without a deal is...what....Bernie can't imagine what.

Bodow's new play seems to be finding its audience. At the performance I attended, attention was definitely being paid.

Neubeck is at his best ever. Arnold is the energizing center. Erickson makes a welcome return to IT after being gone for far to many years. Dupont and Boyles are solid representing the young adult generation with tons of new ideas and an eagerness to start making their own deals.

Posted by TucsonStage.com at 5:45 AM