"SOVEREIGN BODY" ASKS "WHO'S IN CHARGE?" 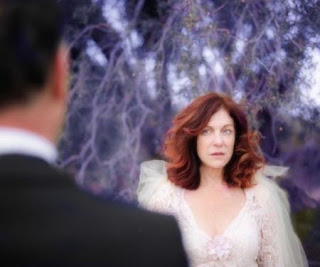 Susan Arnold plays Anna, in control until she suffers a neurological disease.

Remember the name Emilie Beck. She is a young playwright whose brilliant dialog cuts through the artificial air of theater with an urgency that shouts “This is real people talking!”

Her unfailing ear for giving everyday topics a contemporary tone slices cleanly through every scene of “Sovereign Body,” receiving its southwestern premier by the Winding Road Theater Ensemble.

While the actors sit around a dinner table in casual conversation, someone or other will drop a glittering crumb of thought such as “life must be progressive” or “freedom always comes at somebody's expense.”

Think of these off-handed bon mots as seeds for time bombs that will take root and explode later in the second act. It is this slow crescendo that builds the power to that final scene.

The catalyst of “Sovereign Body” is an unnamed disease described as a “neurologically degenerative affliction.” That's a fairly broad medical term but made me think more specifically of ALS, the incurable condition that takes its own sweet time killing its victims.

"But hey,” says the disease. “Don't be mad at me, I'm just doing my job. It's what I was put on Earth to do. It's nothing personal. I am a force of nature” (or words to that effect).

This isn't the voice of Death, like in a Grim Reaper sense. Beck the playwright identifies him as “The Man.” He's just one of nature's many forces, bringing a specific disorder. He doesn't even pick his victims. A higher force of nature presumably does that.

The Man, as craftily played by Tony Caprile, feels sympathetic toward the people he must show up to afflict. He knows they will be upset. They always are. So he tries to embrace them gently, giving them time to adjust to the idea they will surely die...one day.

It is during this interval between first awareness and finality that the play takes place. Susan Arnold plays Anna, a rabid control freak and successful chef who resists losing control at first. But as the disease grows stronger, she wonders if, when you get sick, are you still the same person?

And if you are a different person, how much of you remains the same person? And just how much will the reactions of family members around you shape the nature of this new person you are becoming against your will

But that is just the framework of the play. “Sovereign Body” isn't depressing. It isn't sad in a Nicholas Sparks kind of bittersweet way.

Caprile's performance is so effective we start seeing life (and the necessity of death) from his point of view, sympathetic to his acceptance of this unique position.

Arnold is equally good at defining a person with such an annoying personality in the beginning, but whose very forcefulness and overbearing attitude later become virtues essential to the survival of her spirit.

Posted by TucsonStage.com at 5:45 AM