DEATH IS "NO WAY" TO BECOME FAMOUS 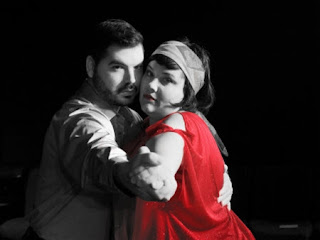 Steve Wood and Amanda Gremel in their  dance of death.

It isn't often that Tucson theater offers you the chance to enjoy a singing death scene. Yet, here is Steve Wood dying onstage with a song on his lips in the Douglas Cohen/William Goldman comedy musical “No Way To Treat A Lady” at Live Theatre Workshop.

This lively romp through the life of a frustrated actor who makes being a serial killer his chosen art form also echoes a little film noir shimmer, where a couple of guns are drawn, as the detective tracks down his man while trying to deal with more mundane problems such as keeping his girlfriend happy and living in the basement of his obsessive mom's house.

It is enough to remind you of the adventures of Guy Noir in the city that knows how to keep its secrets on National Public Radio's “A Prairie Home Companion.”

Annette Hillman is director of this swirling human drama, with musical direction by Sarah Ross. The other musicians are Brianna Petty and Valentin Lopez, their "orchestra pit" a black box at the side of the stage.

While none of the songs are particularly melodic in a “West Side Story” sense of the word, each contains lyrics that keep moving the plot forward. So pay attention to the words.

Even though Kit the actor can't get the press to notice his acting, he does get some attention for killing people. He becomes obsessed with getting his murders mentioned on the front page of the New York Time. Since the play is set in the Big Apple in the 1960s, it takes more than just one or two murders to get the newspaper's attention.

Meanwhile Mo is finding success as a member of New York City's finest, getting promoted to detective and then to being top detective. But what he really wants is a real life with a real girlfriend...sigh.

Roby gets just the right air of Sarah's traditional girl-next-door sweetness, unspoiled by the millions of dollars that is her inheritance.

Wood is absolutely terrific playing the killer, who takes on a variety of personalities to disarm his victims (all played by Gremel, who is also Mo's mom in cat's eye glasses).

A special note should be given to Stephanie Frankenfield the production's costumer. Every actor's every entrance is made more memorable by a revolving door of her eye-catching garb.

“No Way To Treat A Lady” runs through March 19 with performances at 7:30 p.m. Thursdays-Saturdays, 3 p.m. Sundays, at Live Theatre Workshop, 5317 E. Speedway Blvd. Tickets are $20, discounts available. For details and reservations: 520-327-4242, livetheatreworkshop.org

Posted by TucsonStage.com at 5:06 AM