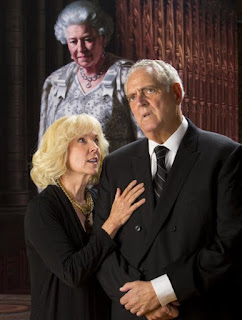 Anglophiles of Tucson, “King Charles III” is your kind of play. A solid knowledge of the British royal family is definitely helpful in appreciating the satire and unspoken humor in Arizona Theatre Company's season-opening production.

English playwright Mike Bartlett has also taken this somewhat futuristic fantasy for a trip into the past, as well, by writing the dialogue in blank verse using mostly iambic pentameter.

This tactic does create a kind of Shakespearean atmosphere that makes it seem like the Bard has returned to modern London, where he discovers those beloved kings and queens of yore are now mere paper cutouts of their once powerful selves.

A lovely quality of paper, to be sure, but completely limp, lacking any fiber whatsoever. Can you say “brooding figureheads?”

Unfortunately, taking the stuffy manners of today's royals and presenting them with the artificiality of Shakespearean language – spoken by actors using a British accent, often facing the audience to deliver their lines – does not make for an easy accessibility into this theatrical experience.

Particularly for we commoners over here in the colonies.

If you are wanting an amusing evening of light-hearted fare, “King Charles III” is not the play for you.

However, should you feel the need for a heavier cultural pursuit steeped in centuries-old tradition with Shakespearean heft, then you will be mightily pleased.

Matt August the director brings deep flavor to Bartlett's vision of how Shakespeare might imagine what would go on inside Buckingham Palace immediately after Queen Elizabeth II has passed away.

Charles (Peter Van Norden), the patiently waiting eldest son of the Queen, is married to Camilla (Cathy Dresbach). Next in line after Charles is William (Adam Hass Hunter), married to the ambitious Kate (Kate Maher Hyland).

Red-haired Harry (Dylan Saunders), seated fifth in this kingly succession, is in love with the free-thinking commoner artist Jess (Jeanne Syquia). Harry is happy to relinquish any claim to the throne, just so he and Jess can live happily ever after.

So, OK, the Queen dies suddenly of unexplained causes and Charles is King. An elaborate protocol kicks in.

Charles takes an immediate liking to his upgrade in prestige and power after so many years. He is finally “The Guy.”

Parliament, meanwhile, possibly sensing an opportunity passes a law limiting press freedom. In a rush of righteous indignation, King Charles refuses to sign off on it.

Parliament pushes back and so King Charles (in a move that can't help but bring Donald Trump to mind) abolishes Parliament. Camilla, the common sense one, is beside herself.

Always calculating the odds is stately William. Constantly tugging at William's sleeve is his ever-calculating wife Kate. But her mind is not complicated by conflicts of propriety. She is going for the power.

By this time, Harry is totally disgusted with the whole business. Romantic idealism, and Jess herself, have Harry tightly in its grasp.

Bartlett does have more in mind than a satirical depiction of royalty as meaningless hierarchy. Symbolically, it is important to the Brits that their royal ruler stays powerless. But it is also important that their ruler remains on the throne to tacitly approve whatever Parliament passes.

August as director has added to the play's metaphorical layers by employing scenic designer G.M. Mercier's towering floor-to-ceiling slaps of sliding panels that imply monolithic power without providing any details.

Von Norden's King Charles is tormented, a la the best of Shakespeare's kings. He has waited sooo long to feel the weight of that crown on his head, only to discover nobody really cares anymore. Abolishing Parliament doesn't bring him more power. It only makes things worse.

“King Charles III” runs through Sept. 30 with performances Tuesdays through Sundays at various times in the Temple of Music and Art, 330 S. Scott Ave. Tickets are $25-$63, with special discounts available. For details and reservations, 622-2823, or visit arizonatheatre.org. Running time is 2 ½ hours.

Posted by TucsonStage.com at 4:04 PM