"ANGELS IN AMERICA" HAS POIGNANT PATINA 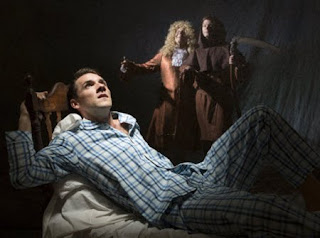 photo by Tim Fuller
Christopher Johnson an unforgettable Prior Walter.

To experience the fastest three hours you will ever have in a theater, see the Rogue's Theatre's stunning production of “Angels in America Part One: Millennium Approaches” directed by Matt Bowdren.

Seen today – some 30 years after the blood disease began seeking out homosexuals, putting their hidden lives on display in the sterile glare of doctors' examination rooms – the aching “Angels in America” plays very differently than it did on Broadway in 1993, when it was playwright Tony Kushner's scream of desperation to be taken seriously.

Back then, AIDS was a demonic threat with no natural enemies. Was this the gay apocalypse? And why didn't straight people seem more concerned? They had all the money, why didn't they do something? With so many dying every day, who would be the artists, actors and musicians of tomorrow?

Time has answered some of these questions. The feared apocalypse didn't arrive, some drugs were developed to hold back Death, keep it waiting in the wings. A greater understanding has developed in the straight community, too, a more general curiosity about what life is like in the homosexual community.

At the Rogue, the brilliance of Kushner's writing is given the space to be appreciated. Now the play feels bigger, more prophetic, less innocent and infinitely wary of promises made to comfort the afflicted, spoken by professional care givers who were secretly thinking “Thank God I'm not gay.”

Could we who weren't sick have done more to help those who were? Now that we have wrestled with this experience, will we do better next time? Where did all that anger and suspicion come from in the first place?

Although the themes of “Angels in America” are huge, and the theatrical demands massive, the play itself is constructed as a series of short scenes involving the lives of a gay WASP, a gay Jew, a troubled Mormon couple and the perpetually power-driven homophobic Washington lawyer Roy Cohn who fought against the scourge of AIDS with every breath of his life, insisting he was never a homosexual.

Each of these scenes vibrates with compressed intensity. There are no flat spots, no filler. The pace is brisk and the subject matter explosive.

Every member of the audience will come away with a different impression of what “Angels in America” actually means. That is Kushner's genius.

Christopher Johnson brings a career-making performance as Prior Walter, struck down in the prime of his young life through no fault of his own. The pain, the fear, the struggle with himself are all out there, projected with such conviction he becomes the Everyman of this epidemic.

Joseph McGrath catches the conflicted arrogance of Roy Cohn, a thriving power player among Washington's elite, cut down without a second thought of the consequences by Fate itself, while being given enough time before dying to toss and struggle, hug his own helplessness to do anything about it.

Louis Ironson is Prior's dedicated Jewish lover who becomes Prior's reluctant lover as the illness takes over Prior's life. Brooklyn-based Brian Hendricks (a University of Arizona theater grad in 2007) is brilliant in creating this conflicted person who feels guilty for wanting to save himself.

The Mormon couple, Joe Pitt (Ryan Parker Knox) and Harper Pitt (Holly Griffith) more or less represent mainstream America. She is psychotic and drug-addicted. He is a rising star with a future in Washington politics, a very hot favorite of Cohn. Joe is also gay, but losing control over his ability to stay in the closet.

“Angels in America Part One: Millennium Approaches” runs through Sept. 25 with performances at 7:30 p.m. Thursdays through Saturdays, matinees 2 p.m. Saturdays and Sundays, at the Rogue Theatre, 300 W. University Blvd. Music appropriate to the play is performed 15 minutes before each show.

Tickets are $35; student rush $15 with valid ID, on sale 15 minutes before curtain. For details and reservations, 551-2053,www.TheRogueTheatre.org

The running time is three hours, with two intermissions.

Posted by TucsonStage.com at 4:03 PM