"BEYOND THERAPY" IS COMEDY FROM BI (before the internet)

Who doesn't love a little nostalgic time travel, even when you go so far back in time nobody has a cell phone or any idea about the internet? 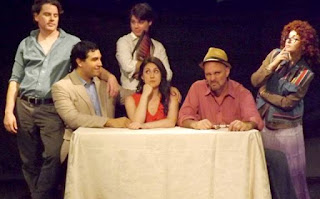 That's where we are in “Beyond Therapy,” now getting a lively presentation by the Roadrunner Theatre Company at the northeastside APCOT Theater.

This absurdist comedy by Christopher Durang opened in 1981, flaunting its timeliness with chockablock dialogue references to Gary Gilmore, Joan Didion, Jill Clayburgh, the play “Equus,” Bell Telephone's encouragement to “Reach out and touch someone,” Shaun Cassidy, David Berkowitz, Rice-A-Roni, “Three's Company,” Kate Millet and many others.

The theme, if you will, details the struggles of young adults from that pre-AIDS era to win the Dating Game of real life. There was a lot of premarital sex (as they called it in polite company) for all genders and a lot of confusion about what to do next.

Everyone's personal standards seemed to be changing so quickly. Every morning when you woke up it could feel like someone had come in over night to change all the rules.

Lawrence Fuller as director has his cast of six play all the humor straight, as if they are completely unaware of any of the crushing cultural mash-ups we've had in the intervening decades.

Cynicism comes so naturally to everyone these days, it is kind of cute to see people willing to act confused by that book covering the new rules for men talking to women, women feeling proud of being sexually active, therapists trying to act professional when everybody knew nobody knows what the heck is going on.

Mayela Morales as Prudence does most of the heavy lifting, fending off the advances of her wannabe boyfriend Bruce (Benjamin Acosta) and her overly eager therapist Stuart (Christopher Younggren), who is also her former lover.

Bruce has similar challenges with his therapist, Charlotte (Robin Carson), who is even more confused (if not sexually involved with him) and often talks to patients through her stuffed dog Snoopy.

In the spirit of the times, Bruce is a proudly bi-sexual guy who just wants to have it all. Charlotte is equally spirited about her work, insisting that all her patients will be fine if they just break out of their old conformist personalities and express their true, natural selves.

Posted by TucsonStage.com at 7:26 AM