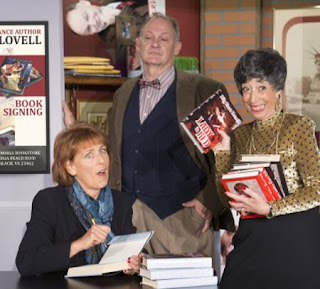 You say you're in the mood for an evening of theater – but nothing too brainy. Nothing too deep. Just a nice, happy evening of entertainment. Like TV, but without the commercials.

Have I got the play for you. Invisible Theatre's seasoning-opening “Coming Apart,” a romantic comedy by Fred Carmichael that begins with divorce and ends with....well, that would be giving away the ending, wouldn't it.

Actually, “Coming Apart” doesn't begin with divorce. Frances (Susan Kovitz) and Colin (David Alexander Johnston) have been married 21 years. But the play is scarcely three minutes old when both announce simultaneously, “I want a divorce.”

Neither can believe the other would actually want the same thing. Colin is the most upset, unable to understand why his wife would ever leave someone as lovable as he.

Then it is time to settle back and watch a string of scenes exploring the same domestic twists and turns that decades of television watching has trained us to expect.

Since Kovitz and Johnston are two of IT's most popular actors, we have the confidence of being in the hands of professionals. Stepping in to add a little variety to the onstage whimsy are Jack Neubeck and IT's own managing artistic director Susan Claassen.

Here's the setup. Colin writes a successful newspaper humor column. Frances writes romance novels. She isn't as financially successful as he, which he doesn't mind pointing out now and then.

So, more than 21 years ago, Frances first met Colin in the office of Sylvia (Claassen), the agent for both of them. To balance out the sexes, Sylvia is married to Colin's buddy Bert (Neubeck).

Once all this gets established, we learn that Frances doesn't really want a divorce, she's just stuck in starting her new novel “How To Survive A Marriage.” Using her own marriage as a literary laboratory, she asks Colin for a divorce just to see what will happen.

Then we have the judge (off stage) give the pair a six-month cooing off period to be sure a divorce is what they want. That's what the play is all about.

Is this still sounding interesting to you?

The program lists three directors, “Fred Rodriguez and James Blair with Kathryn Byrnes.” That's almost one director for each cast member. Why did it take so many? Carmichael's script is pretty simple.

As Frances and Colin work on their strategies, they flash back to earlier times in their lives. There is also one scene where they flash ahead to the future, when both are elderly and need assistance.

At first it seems like “Coming Apart” might be a tongue-in-cheek satire of romance novels and classic films of the 1930s. Several lines from old movies get spotlight moments.

But by the end we are on safer, saner ground where everything feels more regular. This cast of four, all professionals to the end, hit their marks and deliver a positive message.

The secret to surviving a marriage is to...well, there I go again, about to give away the ending.

Tickets are $32. For details and reservations, 882-9721, or visit invisibletheatre.com

Posted by TucsonStage.com at 7:41 PM