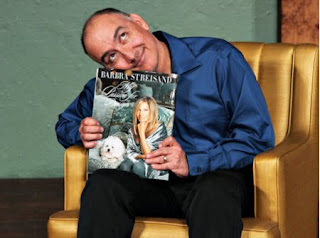 Alex More (Keith Wick) finds out his dream job is more than a dream.

Wow! Talk about getting the new year off to a fast start. Keith Wick at Live Theatre Workshop has set the bar quite high with his one-hander that probes the nature of fame and the inevitability of loneliness in the thoughtful comedy “Buyer & Cellar” by Jonathon Tolins.

Working alone on, basically, a bare stage for 100 minutes telling one long story while describing about a dozen distinct characters, including Barbra Streisand, Wick becomes a veritable chameleon of personalities with acting skills.

Credit the show's appealing jauntiness and nimble leap among the story's characters to the work of director Sabian Trout.

Having no set changes, costume changes, props or lighting effects he brings the most fantastical story to life, wearing nothing but an understated jogging outfit and the whitest running shoes imaginable.

If the plot below doesn't sound interesting, please don't let that deter you from buying a ticket. The insight and the laughter are worth the effort.

Wick plays the mostly unemployed but ever optimistic Los Angeles actor Alex More. He couldn't get a toe hold in the New York off-Broadway scene, so he moved to the other coast – where he did get a job, at Disneyland.

The show opens without any theatrical nuance whatsoever, just More telling the audience about the New England-style barn with windmill that graces Streisand's Malibu estate. In the vast basement of this sprawling barn Streisand has built a series of quaint shops as if they are facing onto a quaint street. Each shop contains in turn Streisand's personal doll collection, her costumes, a movie theater that only shows her movies and so on.

Her basement is basically a mini-mall of everything Barbra. All the items are presented as if they are for sale, but they aren't. The only one admitted inside is Barbra herself.

Apparently all of this is true, and there is an elaborate coffee table book written and photographed by Streisand – “My Passion for Design” – to prove it.

The story arc, which is completely fictitious, begins with Alex More answering an ad to be in charge of this basement mall. He thinks it might be like performance art, or something.

What follows is an amusingly frothy commentary that gets many of its jokes from the gay community's fascination with Barbara, pokes at movie industry insiders, show biz eccentricities and also More's own problems with his jealous boyfriend Barry that we never see.

But the heart of “Buyer & Cellar” is its oblique references to the nature of fame, the pressure to stay famous and the feeling that no one is really on your side and everyone is actually hoping you fail.

It is easy enough to believe that Barbra Streisand has it made, wants for nothing. But what if she felt like her house of wealth was a house of cards that could collapse at any minute if she didn't stay intensely vigilant over tiny detail that affect her life.

By the time Wick takes his curtain call and deserved standing ovation, you will feeling differently about your own life, as well.

Tickets are $15 Thursdays, $20 all other days. Discounts available. For details and reservations, 327-4242 or visit livetheatreworkshop.org

Posted by TucsonStage.com at 3:55 AM