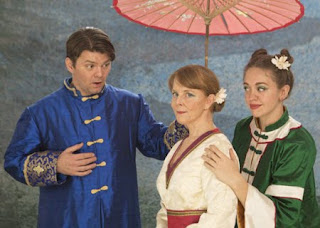 From left, Ryan Parker Knox as Xu Xian, Patty Gallagher as the White Snake and Holly Griffith as the Green Snake.

There is magic of the mind as well as the art in Rogue Theatre's silken fantasy production of “The White Snake,” Mary Zimmerman's contemporary stage adaption of an ancient Chinese tale.

Most obligingly, Zimmerman enriches the myth by including a few little breaks in which a narrator describes variations the story has acquired over the centuries. So cleverly does it unfold, every person in the audience could come away with a bit different insight from this evening of enchanted theater.

A quick spin through the internet reveals that at different times in history, the story has had different heroes. Several centuries ago the Buddhist monk Fa Hai was cheered for his determination to honor his faith and expose the dishonesty of White Snake.

Then there was the later Romantic Period when the idealistic White Snake wanted to become a human, and fell in love with Xu Xian, a reincarnation of the man whose Buddhist kindness made him refuse to kill a small snake centuries earlier – that snake's spirit would evolve to become White Snake.

None of this is difficult to follow. An ensemble of seven players take turns playing minor characters and being a kind of Greek chorus. They also add considerable beauty to the production by wafting large pieces of silk symbolizing various forces, carrying bright paper lanterns on slender poles, spinning various parasols and the like.

There are a few songs to sing, as well, and a trio of musicians at the foot of the stage provides atmospheric music throughout.

The power of love, the importance of forgiveness and the necessity of acceptance are all in there, too. Just like in real life, all four characters have their good and bad points. Sometimes the bad points might seem to outweigh the good points, but then the story shifts and everything changes.

For those keeping score in the audience, a measure of love, forgiveness and acceptance will be required.

Tickets are $35; student rush 15 minutes before curtain. For details and tickets, 551-2053 or theroguetheatre.org

Posted by TucsonStage.com at 2:11 AM