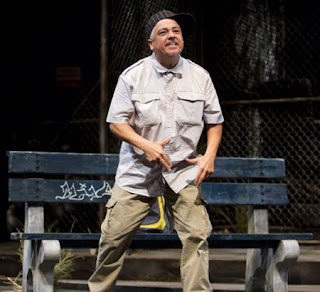 Ruben C. Gonzalez portrays the desperation of young men and women living on the border in "La Esquinita USA."

Playwright and actor Ruben C. Gonzalez puts his purpose right up front – to end the suffering of the children. But not the little children Jesus talks about.

The big children, the muscular teens burned out on drugs, the seductive teens having babies before they are old enough to drive a car to the Emergency Room. Those children.

Gonzalez comes straight from the famed El Teatro Campesino movement, which he joined 25 years ago. His rich theatrical background includes an MFA in Dramatic Ats from the University of California, Davis.

Without anger or any political agenda Gonzalez acts out the sad tales of several lost adolescents who never asked to be born, adrift in the dying town of Esquinta – a southwestern border place where most everybody is brown or black and lots of people get nicknames like Lencho, Animal, Sleepy, Tweeker, Skinny Black and Wilo.

There's also one named Sunshine who isn't sunny. All their stories are quite bleak, reminiscent of Charles Dicken's recollections from London's bleak underbelly in a different century. But their suffering is the same.

We are all too familiar with the modern elements of teenage self-destruction, the anger and helplessness. The single mothers with four children, working two or three jobs just to pay for rent and groceries. Haggard mothers too busy to plant the seeds of dreams in their own youngsters, simply because “there was too much on her plate, or not enough.”

Using a few props and shifts in lighting, Gonzalez plays a dozen characters remembered by Lencho, the narrator. Central among them is Daniel, in pain as his crystal meth wears off and in a panic because he can't get any more crystal meth until his dealer gets paid $300.

As young Daniel struggles through this predicament, frequently interrupted by cell phone calls – some desperate, some frantic – we meet the others in his ruptured life.

The dramatic set design by Regina Garcia is full of junked out trash cans and discarded tires, dominated by a massive chain link fence and the grime of depression.

Theirs are the forgotten towns and invisible lives we always try not to think about. What Gonzalez does is remind us in a caring way that all these dark and troubled adolescents turned into junkies and criminals used to be bright eyed and happy little tots, full of optimism and eager to learn about their world, without having any idea how heartless the world actually is outside their mothers' kitchens.

If nothing else you should leave “La Esquinita USA” a more compassionate person, remembering those rude and intimidating young adults you see from afar didn't mean to grow up that way. This isn't the personality they wanted, nor the experience they sought.

Gonzalez doesn't offer any solution. The problem is so bad, the solution feels like a long way off. But surely the first step for all of us on this difficult journey must begin with compassion. It has to.

“La Esquinita USA” runs through Feb. 4, with performances at various times in the Temple of Music and Art, 330 S. Scott Ave. Tickets are $30-$75. For details and reservations, 622-2823, or visit arizonatheatre.org

Posted by TucsonStage.com at 6:18 PM