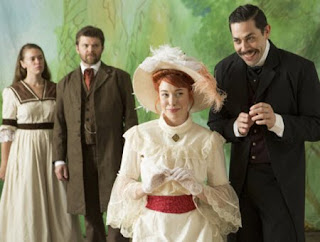 Anton Chekhov would have loved the bumper sticker: “Life is what happens while you're waiting for something big to happen.” So will everyone who takes in the Rogue Theatre's production of sizzling repression in Chekhov's “Uncle Vanya.”

There always seems to be something a little extra intimidating in Russian literature, particularly Chekhov. All that brooding. All that gloom.

But Joseph McGrath hasn't done anything like that directing this “Uncle Vanya.” He fills the dark stage with heavy furniture and the conflicted desires of people who are in way over their heads. He makes the air crackle with their frustration to break free...if only they knew how.

Thanks to cable television and the long-running “Seinfeld” show we have lots of training in appreciating stories where nothing happens. Which is also how Chekhov is also often described.

The Rogue's marketing team has stressed how the playwright insisted “Uncle Vanya” is a comedy. Which it is, in the sense that, like the characters in “Seinfeld,” their problems are of their own making.

Just like the old firehouse dog who can't stop jumping on the fire truck when the bell goes off, the Professor has stayed closed up in his study for many years writing and researching, because that is all he knows.

So too, the doctor. He hates always tending to self-centered patients when he would rather be saving Russia through the scientific study of forestry. His concept of how civilization is destroying the environment seemsa remarkably prescient.

As for Uncle Vanya, he feels like he wasted his life being obedient and managing the Professor's estate, instead of doing what he wanted to do.

But the plaintive heart of this production is Holly Griffith's pitch-perfect performance as Sonya, the Professor's daughter from his first wife, and now about the same age as the Professor's second wife.

Reluctant to speak out for herself, Sonya feels trapped by the social conventions of her time. Sonya has always dreamed of marrying the doctor, and would make him a wonderful wife. But Astrov, himself a dreamer, only has eyes for Yelena.

In the end, it is Sonya and Astrov who tug at our hearts the most. They are blameless, have done nothing wrong. Yet, life weighs heavy on them.

Sitting out in the audience, we feel as helpless as they are to change anything for the better.

For tickets and reservations, 551-2053, or visit theroguetheatre.org

Posted by TucsonStage.com at 7:06 AM