SWEET ENTERTAINMENT IS "ALIVE AND WELL" AT INVISIBLE THEATRE 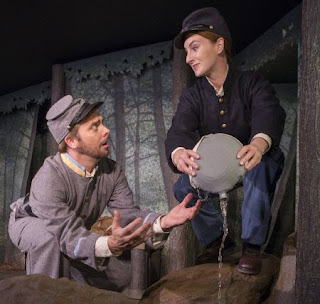 photo by Tim Fuller
It is a No-No for Civil War re-enactor Zahariah Clemenson IV (Sean William Dupont) to keep moonshine in his canteen, in the opinion of prim and proper freelance reporter Carla Keenan (Verity Stansall).

When's the last time you saw a genuinely charming piece of theater? Something that won you over scarcely before it had begun.

Invisible Theatre's current production of “Alive and Well” by Kenny Finkle, directed by Susan Claassen, is exactly that kind of theater. The kind where the actors are more important than the play.

Verity Stansall and Sean William Dupont are the entire cast. They are also married to each other. Not that we are telling young actors, “If you want to be so charming, get married!”

It's just that Stansall and Dupont do have a special connection together. He playing the good old boy from Virginia and she playing the prim lady who values proper manners – even though she is also a New Yorker. And a freelance writer. These are not characteristics that normally go with a genteel personality.

So right away we realize Finkle's sense of fantasy knows no bounds. This blatant disregard for what we all know is the truth gives the story a fantasy fairy tale effect, adding to the fun.

Although the plot is practically co-incidental to the pleasure, here is how it goes. Zachariah Clemenson IV (Stansall) has a deep love of the Old South, the antebellum South, where chivalry was the standard by which every man was measured.

Zachariah measures himself by this standard, too, and lives to be a part of the annual Civil War re-enactment of soldiers on the trail between the battlefields of Petersburg and Appomattox in Virginia.

This particular route is also known for sightings of “the Lonesome Soldier,” a ghostly figure of the Confederacy. So, things being what they are, Zachariah is now the guide for Carla Keenan (Stansall), the vigorously correct reporter who insists on maintaining a professional relationship even as the two are supposed to spend several nights on the trail together while Carla does her reporting on the legend of “the Lonesome Soldier.”

Of course you can see where this is going. Who couldn't? That's not the point. These two are so good at presenting their respective personalities, the suspense is in trying to figure out how they will ever overcome all the obstacles that litter their own personal battlefield.

Tickets are $32, with discounts available. For details and reservations, 882-9721, or visit invisibletheatre.com

Posted by TucsonStage.com at 3:09 PM