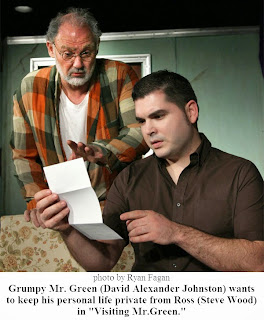 Which should be more powerful – traditional Jewish orthodoxy or modern political correctness?

When playwright Jeff Baron was beginning to develop “Visiting Mr. Green” in 1996, political correctness was emerging as the deadly force for censorship that it has become. The crotchety and orthodox Mr. Green held rigidly to the belief that homosexuality was an abomination in the eyes of God.

Confronting Mr. Green is Ross, a 28-year-old upwardly mobile and thoroughly modern Jew more worried about his corporate success than his knowledge of Jewish history.

Since 1997, “Visiting Mr. Green” has been produced over 300 times in more than 30 countries and translated into 22 languages. So beloved has this show become that reviewers have taken to calling it “critic proof.”

I’m sure they are correct.

Now our own Live Theatre Workshop has brought two of the community’s best actors together to present the Tucson version.  The performance of David Alexander Johnston and Steve Wood is truly compelling.

The best call by director Rhonda Hallquist was getting Johnston to age several decades to play the 86-year-old Mr. Green, complete with tottering steps and raspy New York accent.

In these capable hands, “Visiting Mr. Green” does become more than the sum of its parts, as some of America’s cultural pillars from the past are attacked for being old-fashioned.

It was Mr. Green’s devotion to Jewish orthodoxy that enabled him to get through the anti-Semitism that raged in Europe and the United States in the 20th century. Maybe now the times are friendlier to his religion, but does that mean he should give up the beliefs that saved his life?

As for homosexuality, how long has that been a curse? How much longer will it take for homosexuals to be at least as welcomed into society as orthodox Jews?

The story begins with  Mr. Green looking terminally depressed, living alone in a cluttered apartment. In comes Ross, wearing the power suit and tie of a successful businessman. Mr. Green has no idea who this guy is.

Turns out, Ross almost hit Mr. Green in a crosswalk recently and has been sentenced to six months of community service helping Mr. Green get whatever he needs. From the looks of things Mr. Green needs quite a bit, but he refuses to be helped by anybody.

But then, bonding a little bit over the pleasure of food and the importance of keeping kosher, the men from two very different worlds begin a cautious friendship.

As they are led to reveal bitter secrets about their lives, we learn a little more about ourselves. Baron the playwright includes plenty of jokes and outrageous statements to grease the skids so all this social commentary goes down easily enough.

The bottom line, once again, is an opportunity to quote Rodney King’s iconic line: “Can’t we all just get along?”

Posted by TucsonStage.com at 3:33 PM