"GRABBERS' GRIPS WITH A GRIN 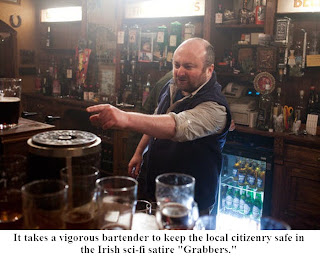 Why didn’t someone think of this before? An octopusian band of space aliens (with about 20 times more tentacles than angry mouths)  invade Ireland, only to discover they are fatally allergic to human blood that contains massive amounts of alcohol.

Thus, the only way for these Irish folk to survive this alien invasion is to stay drunk!

Is that great, or what? The heroes and victims in “Grabbers,” now playing at the Loft Cinema, 3233 E. Speedway Blvd., stumble around like zombies. These are the survivors, doing their best to maintain that essential buzz of immunity, while the aliens keep searching for someone sober to devour.

Maintaining this alcoholic state conveniently explains all the lead actors making terrible (but expected) decisions, plus their general clumsiness and senseless willingness to face the monsters.

Tributes to the creature features of Roger Corman, “Gremlins,” “War of the Worlds,”  “Critters,” “Tremors,” “Lake Placid” and maybe even “The Sorcerer’s Apprentice” are proof enough the Brits are more interested in good times than in doing anything original.

Irish cops, the garda, are represented by senior officer Lisa Nolan (Bradley) and reluctant local peace officer Ciaran O’Shea (Coyle), a man better known for his endurance during off-duty hours at the pub.

While the plot line is predictable, the director depends on the audience to know what comes next, giving his cast the chance to develop a frolicking spirit and an endearingly child-like attitude toward defending themselves against attacks from outer space.

Granted, “Grabbers” isn’t as funny as “Shaun of the Dead,” and could use a spirited comedian such as Simon Pegg, but “Grabbers” still makes for an entertaining movie – especially when accompanied by an adult beverage or two.

Posted by TucsonStage.com at 3:53 PM