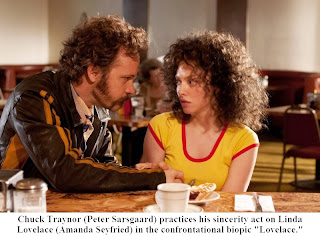 Remember back in the 1970s when extra-sexually active females were celebrated as being the new model for America’s liberated woman? One shining example was Linda Lovelace.

Up-to-date couples would demonstrate their open-minded acceptance of this sexual revolution by going to see “Deep Throat,” playing at all the respectable movie theaters.

Then in 1980, Lovelace published her autobiographical “Ordeal,” revealing she had been forced to perform “Deep Throat” at gunpoint. In effect, she was held prisoner by her husband

Chuck Traynor for years. The liberated Lovelace attitude that so many celebrated was actually rape taking place in front of the camera.

Lovelace, real name Linda Boreman, was not a leader but a victim.

Embracing idealist principles can become so treacherous, like the idea also so popular at that time of letting patients decide how much to pay their doctors.

So anyway…now we have “Lovelace” playing at the Loft Cinema, 3233 E. Speedway Blvd. Amanda Seyfried has the title role, presenting Linda as an ordinary girl raised by a strict mother (Sharon Stone, unrecognizable) and taught to always please her man.

Innocently enough, at a roller rink in her hometown of Davie, Florida, Linda attracts the attention of the significantly older and decidedly smarmy Traynor (Peter Sarsgaard). Flattered at first by Traynor’s attention, Linda soon finds herself trapped on a speeding roller coaster of screaming debauchery.

Holding center stage is the making of “Deep Throat.” There is no nudity, but there is a lot of violence as Linda is roughed up quite a bit when she begins to resist Traynor’s psychotic ways.

But that is only the first third of “Lovelace.” The second third goes back to show the same arc of violent courtship and movie-making from Linda’s point of view as the manipulated victim. This is when the film, directed by Rob Epstein and Jeffrey Friedman, becomes painful to watch.

The final third covers Linda’s ultimate triumph as she, alone and with virtually no resources, fights back to get her freedom from Traynor and digs out with her published confessional “Ordeal.”

Trying to cover so much ground is both a strength and weakness.  Some of the revelations are heart-breaking. Others, to be honest, look unintentionally campy.

Linda, who died in a car crash in 2002, deserves to have her courageous tale more fully told. But “Lovelace” is a good start and, for now, it is the best we have.

Posted by TucsonStage.com at 8:53 PM