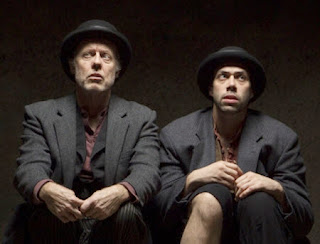 Joseph McGrath as Vladimir and Matt Bowdren as Estragon

Over the years I've seen three productions of “Waiting For Godot” and every one felt like I was seeing it for the first time. The Rogue Theatre's excellent production is no exception.

The unique abstractness and at the same time universality of “Godot” make the play a perfect ink blot test for one's own passage through life.

Are you just starting out on a new career, with an entry level job in a big firm, wondering how you will make your mark?

It's in this play.

Are you feeling bogged down in family life, sandbagged by the daily tedium and repetition?

That's in this play.

Hope is in here, too. But is it a fool's hope or a courageous determination to finally make something of oneself?

As an artistic achievement, director Cynthia Meier and associate director Patty Gallagher have found the delicate balance point in this classic work of absurd theater by Samuel Beckett. The pacing is thoughtful, but never deliberate. All the performances of each character are gimmick free, totally natural in their presentation of conversation that is patently...absurd.

That is, absurd in the sense there is no linear narrative taking the audience from point A to point B trough conflicts and hassles that keep building tension until that final sweet resolution at the end.

It's this naturalism that makes the frustrations of Estragon (Matt Bowdren) and Vladimir (Joseph McGrath) so haunting.

Maybe we in the audience have no idea why Vladimir and Estragon keep deciding to continue waiting. But who among us hasn't felt those same bank moments in life when we don't know what to do next, and at the same time feel so fearful of doing the wrong thing, of making a mistake.

Not only do Bowdren and McGrath walk this tight rope with the alacrity of acrobats, so does David Morden in the role of Pozzo, a poser who acts like a wealthy man, but has a hole in the knee of his pants.

In several scenes, Pozzo even seems to care about the burden of hapless Lucky (David Greenwood), poorly dressed and angry about being led around on a rope but also resigned to his own diminished circumstances.

The 2014-15 season in the arts began with several exceptional productions. The Rogue keeps this string going into the new year with an exceptional presentation of “Waiting For Godot.” Since this work isn’t staged very often, don't miss this opportunity to see such an affectionately understood work of art.

Performances continue through Jan. 25, at 7:30 p.m. Thursdays-Saturdays, 2 p.m. Sundays, at the Rogue Theatre, 300 E. University Blvd. All tickets are $32; $15 student rush tickets 15 minutes before curtain, when available, with current ID. For details and reservations, www.theroguetheatre.org

Posted by TucsonStage.com at 7:47 PM