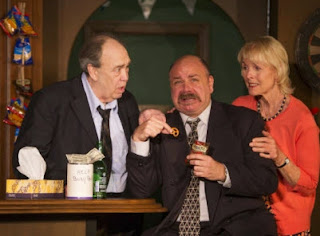 Taking a chance on the future just never gets any easier. Not when you are fifty, or sixty, or whatever. Additional experience is of no advantage when it comes to predicting what will happen next.

We all know that, of course. Sometimes people say “I wish I could be 25 again and know what I know now.”

I always wonder “What do they know now?”

Nobody has a better answer in Bruce Graham's intensely performed Invisible Theatre production of “Stella & Lou,” directed with precision by Gail Fitzhugh.

Set in a dowdy South Philadelphia neighborhood bar just before closing time, Stella (Molly McKasson) and Lou (Roberto Guajardo) both feeling dazed to find themselves alone and deep into middle age, joust with each other and with their own fears while giving those in the audience good reasons to contemplate what's left of their own lives, as well.

Stella is an emergency room nurse, who cared for Lou's wife Lucille in her final weeks and got to know Lou, a guy who figures it's safer to be set in his ways. Though it has been two years since Lucille passed away, Lou wears her death like a shield – his reason for not doing anything more with his own life.

Stella's custom is to stop by Lou's tired little place around midnight every Monday, Wednesday and Friday for one drink, to relax a little before she goes home. Lou looks forward to these times, as well.

But then we discover Stella is thinking about moving to Florida to live with her daughter. Lou tries to hide his concern, starts talking about alligators and hurricanes.

Yes, Graham the playwright is taking us down a familiar path where the usual shadows are threatening both of these insecure folks. We know the stress, we know the story...and we always love the ending.

There to provide some comedy relief and a few more stories is David Weynand making his IT debut as Lou's buddy Donnie. The camaraderie between these two is gentle and feels authentic – the kind of guy-friendship based on needling each other.

In other productions of this show reviewed online, Donnie is played by a younger guy. This chemistry at IT feels better, with Donnie and Lou being contemporaries, each understanding the other's confusion about what to do next with their lives.

Lou is sad, for sure. But being sad isn't as bad as taking a chance and being hurt again by someone else. Stella knows Lou is a good guy, but his reluctance to be involved with her is a genuine concern. Maybe it's a mistake to even think of Lou as mating material.

Florida has to be full of older men who are single and not so afraid of the future. They did move to Florida, after all. What's a poor girl to do?

What makes this evening of theater, performed without an intermission, so enjoyable is watching as the back stories of Stella and Lou are slowly doled out. With each new revelation, the friendship of Stella and Lou becomes deeper and richer.

There are no surprises, but there is a lot of love.

“Stella & Lou” runs through Feb. 1 with performances at 7:30 p.m. Thursdays-Saturdays, 3 p.m. matinees Saturday, Jan. 24, and both Sundays at Invisible Theatre, 1400 N. First Ave. Tickets are $30, with discounts available. For details and reservations, 882-9721, or www.invisibletheatre.com

Posted by TucsonStage.com at 8:13 AM