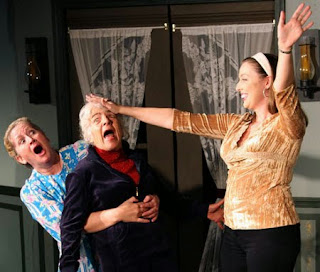 In a moment of inspiration, (from left) Rhonda Hallquist, Carlisle Ellis and Candace Bean feel the spirit .

Although the ways of the church-going crowd aren't as prominent in polite society as they once were, the eccentricities are still the same. At least that is the impression we get in “The Savannah Disputation” written by Savannah native Evan Smith and now playing at Live Theatre Workshop.

Set in that Southern city in present times, we find the upbeat energy of a sunny evangelical fundamentalist being pitted against the deeply rooted Catholic faith of two spinster sisters who have little else to believe in but their Church's promise that life will be much better after they pass on to the Great Beyond.

Christianity does not need to be an important part of your life in order to enjoy this play, which is essentially a comedy playing in the forests of ideology and Bible study. A Jewish couple sitting next to me said they thought it was pretty funny, seeing Catholics and Protestants disagreeing with such determination.

Smith does enjoy poking fun at both sides of this disputation – mostly for their refusal to compromise or even admit the other side has some good points. To the more-or-less rabid fundamentalists, Catholicism isn't even a religion.

The Catholics, meanwhile, have history on their side – as well as many hundreds of years of deep theological study by some of the world's most intelligent minds (and devious politicians, some would add).

None the less, Trout as director has got her cast of four actors cooking on high. With precise timing and and great concentration Rhonda Hallquist, Candace Bean, Carlisle Ellis and Keith Wick whip through their parts with such elan they could make any setup entertaining.

Bean overflows with bubbling eagerness as blond and sexy Melissa, whose trailer park manner belies her conviction that Catholics are all nice people, but they will never get to Heaven unless they accept Jesus Christ as their savior.

Enough with all that praise of Mary the mother of Jesus and all those saints. Those are just more false idols. Then for emphasis, Melissa insists that all the positions in yoga are satanic, too.

Hallquist is the internally pressurized Mary, always acting like she is so angry she's about to pop. Devoted to Catholicism and her priest Father Murphy (Wick), Mary keeps wanting to have Melissa arrested for trespassing.

Ellis plays sweet Margaret, the submissive sister of Mary. Margaret just wants to give peace a chance. When Melissa keeps knocking on the front door of Mary and Margaret, it is Margaret who lets Melissa in – just to be polite.

When Melissa proudly states her specialty is saving Catholics by converting them to the true Christianity, Mary calls for back-up. She invites Father Murphy and Melissa to dinner, without telling them of this “trap.”

What follows is the disputation of the title, a battle of Bible verses and interpretation of Scriptures that can rival those elaborately learned debates in the Middle Ages about how many angels can dance on the head of a pin.

In this play, however, the debate is clearly staged in a spirit of enlightenment for all. We on the outside looking in see the folly on both sides. There is a satisfying resolution, if not an agreement on which Christian denomination has a lock on getting its followers through the Pearly Gates.

“The Savannah Disputation” continues through Feb. 14, with performances at 7:30 p.m. Fridays and Saturdays, 3 p.m. Sundays, at Live Theatre Workshop, 5317 E. Speedway Blvd. Tickets are $20 general admission, $18 for students, military and seniors age 62-plus. Closing Thursday performance tickets are $14. For details and reservations, 520-327-4242, www.livetheatreworkshop.org

Posted by TucsonStage.com at 8:13 AM