"LOW DOWN DIRTY BLUES" WILL HAVE ITS WAY WITH YOU 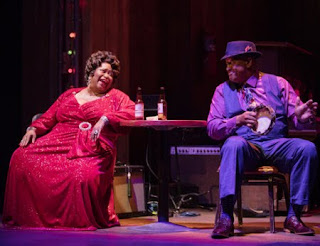 If you're going to call your show “Low Down Dirty Blues,” you better mean it. Arizona Theatre Company has invited this cast to raise the heat and flaunt its earthy nature. The players are more than happy to oblige.

Co-writers and chief instigators Randal Myler and Dan Wheetman have paved the road to satisfaction with some very insistent body language accompanied by song lyrics that raise double entendre to the quadruple entendre level and beyond...way beyond.

Felicia P. Fields as beaming Big Mama gets all sweaty and glistening in a good way, wearing a bright red gown and an attitude that implies “All you got to do is hang on – if you can.”

Scenic designer Vicki Smith must have spent a lot of time in low places, because she captures in deep detail a very authentic looking dive bar – the kind you reach by stepping off the sidewalk and walking down a hard flight of stairs.

Beer signs for Stroh's and Schlitz hang on dingy walls that have soaked up decades of unfiltered cigarette smoke and stale ale. You can be sure the health department doesn't get any respect down here.

This is Big Mama's domain and she rules it with an iron hand. But if she likes you, she can be very, very generous.

When Big mama's eyes start twinkling and she begins to sing “Come On In My Kitchen,” then adds “My Stove's In Good Condition,” staying focused on the business at hand will not be a problem.

Early in the first act, slender guitarist Chic Street Man (his real name) delivers an extremely steamy rendition of “Crawlin' King Snake” that will coil around Big Mama's heart, as well as all the ladies listening in.

Meanwhile, gentlemen, it might be a good idea to remember where you stashed that guitar you had back in high school, and start thinking of snakes as being very sensual. Youtube will help you out with several versions by John Lee Hooker.

All five cast members have extensive stage and recording careers. Fields is a Tony nominee who played Sofia in the Broadway and first national touring company of “The Color Purple.” Street Man was in the off-Broadway hit “Spunk” adapted by George C. Wolfe.

But after the sex is over, the voice you will remember is Shake Anderson, a big man with a big voice and a bigger heart. That's because Act Two takes the songs and the message into deeper waters. Steve Schmidt playing keyboards and Calvin Jones on bass are rock solid, able to take the three lead singers on soul searching journeys that pay tribute to the blues lifestyle born of segregated living and limited opportunities.

There is no plot, but more of a scene as the players arrive, one by one, to begin the “Low Down and Dirty Blues.” Mama talks about how she grew up in the church and how the blues stole her away from the gospel. How she moved from St. Louis to Chicago and eventually got her own club.

Her message: It's not about the songs, it's about the feeling,

After intermission there's more serious talk about how young white boys got rich playing the blues and stealing the music from those who lived it. Anderson gets to sing his big numbers, sure to take your breath away, as the music builds to a rousing soul and gospel conclusion with everybody joining in.

"Low Down Dirty Blues" continues through March 31, with performances at various times Tuesdays through Sundays in the Temple of Music and Art, 330 S. Scott Ave. Tickets are $25-$73. For details and information, 622-2823 or arizonatheatre.org.

Posted by TucsonStage.com at 11:35 AM