The audience is part of the adventure as a cast of 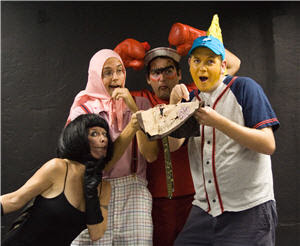 hilarious sea creatures
scour the ocean for the long lost treasure of Long John Shiver-Me-Timbers.
Along the way they discover that family and friends are the most important treasure of all.
This tale of lost treasure and is an original musical that is fun for the whole family.

Tickets Range from
$8 to $5 with
cash discounts available

Posted by TucsonStage.com at 4:00 PM