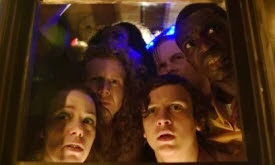 Even frightened teens have metaphorical lives in "+1".

The oddly titled “+1” is sort of a “Ground Hog Day” for teens combined with a touch of aliens invading from beyond. Lovers of philosophical metaphor, however, can have some deeper fun with this off-kilter pic now playing at the Loft Cinema, 3233 E. Speedway Blvd.

There is the repetition of daily life in every high school, the daily skirmishes between the cool ones who constantly need to prove themselves, and the uncool ones who can’t stop striving to prove they are good at something…anything.

And most fascinating of all, in every one of these hallway conflicts, is the wish of all teens that they could go back and start over, skip that blood-curdling awkward moment, that tongue-tied response to the one person who’s been the object of their every fancy since forever.

What kid hasn’t dreamed of a parallel universe where it was just the other people who got caught doing dumb stuff?

Actually, to tell you the truth, every student who wants to be a filmmaker one day should see “+1.” There are the germs of so many terrific ideas planted here like germs cultivating in a petri dish, this movie deserves a special award for idea germination.

Rhys Wakefield from Australia plays David, the cute boy everything happens to. Logan Miller is Teddy, the somewhat dufus sidekick of David. Natalie Hall is the hot girl with no name and Jill (Ashley Hinshaw) is David’s bitchy girlfriend.

A little more metaphor arrives in the setting, a wild party full of strangers in a strange house where anything can happen (as well as a couple of curious product mentions for Home Depot).

You remember how, when you party with people who don’t know you, it is easier to show off a little more, flirt a little more, maybe do other things…. And invariably stumble into a room where you shouldn’t be.

All sorts of things like that happen, as the idea of what every 15-year-old guy thinks goes on at college fraternity parties, is portrayed in full excess.

So OK, then we get to the sci-fi “Ground Hog Day” part which is, admittedly, somewhat confusing. Our four central characters establish themselves then begin to notice there is a certain repetition going on, like they are caught in a time loop.

They also notice, after awhile, that this party contains another person who looks exactly like each one of them. Is it a parallel party in a parallel world?

But interestingly, these doubles don’t have the same memory bank of new experiences as their “originals.” So the originals can share information which the doubles don’t know because it hasn’t happened to them yet.

This becomes a key ingredient as the story evolves, but don’t worry too much about it. Making sense is not the objective here.

Anything that gets you in more of a party mood would be appropriate, though, before buying that ticket and settling down in the theater.

Posted by TucsonStage.com at 4:33 PM