Meet People's 2013 Teachers of the Year 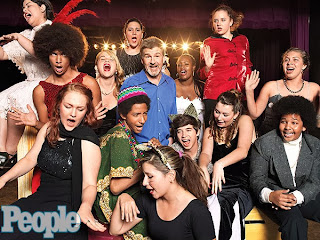 For the second year in a row, PEOPLE editors, along with an advisory board of education professionals, have read through a mountain of inspiring applications for the annual Teacher of the Year Award. And it was no easy feat – there are a lot of amazing teachers out there!

The six winning entries featured teachers who make learning an adventure. With creativity and heart, and some sacrifices of their own, they're helping their students succeed. And as musician and education activist John Legend, a member of PEOPLE's advisory board, said, "These incredible teachers are changing the lives of their students and paving the way for a new generation of American leaders."

We are pleased to announce the class of 2013:

Art Almquist
Theater Teacher at Tucson High Magnet School, Tucson, Ariz.
For the past 17 years, Almquist has been Tucson Magnet’s drama teacher. He has built a cutting-edge theater program rarely seen on the high school level. For Almquist, known for staging productions on topics such as AIDS, environmental activism and immigration, theater offers a way to teach his students a variety of skills that go beyond acting. “He’s influenced thousands of students to find the challenge, the love, and the joy of whatever career they pursue,” says former student Julian Martinez. Almquist is the recipient of the first Readers' Choice award, thanks to thousands of you who voted on PEOPLE.com.

Posted by TucsonStage.com at 2:02 PM