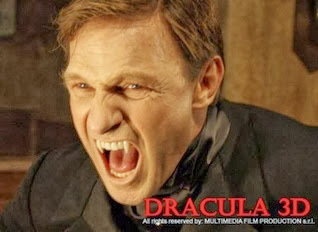 Is there a movie genre called “retro horror?”  If there isn’t, the Dario Argento treatment of the Dracula story (titled here as “Argento’s Dracula 3D”) provides the perfect definition.

It’s all there for your tongue-in-cheek enjoyment at the Loft Cinema, 3233 E. Speedway Blvd. Dive into this guilty pleasure wearing your own set of vampire fangs while chomping on that popcorn. Beer is optional, but definitely suggested.

Campy Italian movies always have that extra ounce of flair – for the classic, for the ridiculous, whatever – which Argento flaunts right off the silver screen and into three dimensions.

“Argento’s Dracula 3D” is made for the drive-in movie circuit. If ever a new release called for those cardboard glasses with red and blue lenses, this one is it!

If you were born too late for the 1950s, those Hammer films and the special effects of Ray Harryhausen, when movies were truly magical, well, here is a knothole peek into the past.

East German actor Thomas Kretschmann brings us a less manicured Dracula, looking more like a slightly rumpled Teutonic businessman used to wielding great power with a soft voice. But when his blood lust rises…look out!

Dario Argento and three other writers do some modifying of the classic Bram Stoker novel so the whole story can be done on one location. The bonkers Renfield gets a much smaller role, and there is only one scene in an insane asylum.

But there is never any problem following the story’s arc. Jonathan Harker (Unax Ugalde, from Spain) has been hired to catalogue Dracula’s sprawling library in his castle in the Carpathian Mountains just outside a provincial Transylvanian village with no electricity or running water.

Lucy lives in the village, and has maintained a friendship with Mina, now married to Jonathan. Early on, Dracula saves Jonathan from several local vampires because Jonathan must stay alive until Mina arrives.

After several remarkable scenes of sensual and sexual hunger, the scourge of all vampires, that crucifix carrying Dr. van Helsing (played by none other than Rutger Hauer), is called in to save the day…and the night.

By this time you will be ready for anything, and another beer.HHHhhhhksdkk

Posted by TucsonStage.com at 1:53 PM